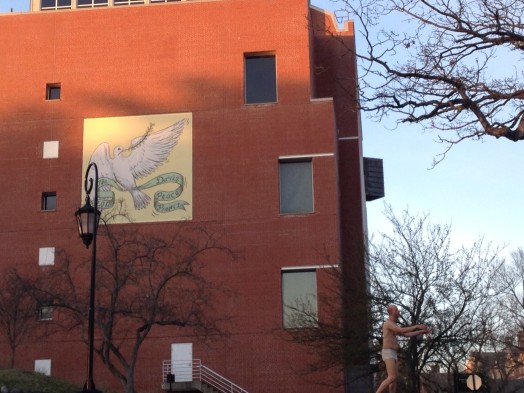 Earlier reports had Tony Matelli’s Sleepwalker sculpture disappearing from the Wellesley College campus this spring, but the school says the piece will remain outdoors until July 20, when it will be returned to the artist. That’s when Matelli’s New Gravity exhibit closes at the Davis Museum.

Just imagine how crushed many students from the Purple class of 2014 and their parents would have been if on Commencement Day (May 30th) they couldn’t take photos with the Sleepwalker, who no doubt will find himself sporting a cap and gown. The Sleepwalker will also be around to greet alums who will be in town in early June for their reunion.

Matelli is said to be making additional versions of the Sleepwalker as well (maybe our April Fools item wasn’t so far-fetched?  Sources confirm that Wellesley commissions more near-naked Sleepwalker statues)