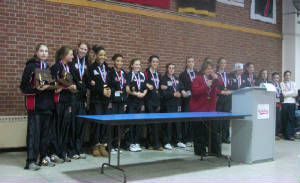 Kristin Cieri is out as coach for the Wellesley High School girls varsity basketball team after 18 years on the job, and the school is now looking for her replacement. The school can’t say anything further since it was a “personnel issue”.  Coaches are offered contracts year to year.

During Cieri’s tenure as WHS basketball coach, her teams scored some impressive results on the court, including winning the Division 2 state championship in 2008 (shown in photo). Prior to coaching at Wellesley, she coached at Norwood High. Cieri is joining the Lexington High School girls lacrosse coaching staff for the coming season and is listed on the Weston Middle School Phys Ed faculty directory.

Wellesley High is also on the prowl for a new coach for the girls’ varsity lacrosse team. Last year, the team had an interim coach.

It’s been a mixed summer for the overall Wellesley High sports program. The program came under scrutiny in July by the state Attorney General’s office, which was looking into parents’ complaints of bullying by two WHS girls’ coaches (a Townsman article did not name names). On a more positive note,  Wellesley High student-athletes were recognized by the Boston Globe as part of its Scholastic Awards program.