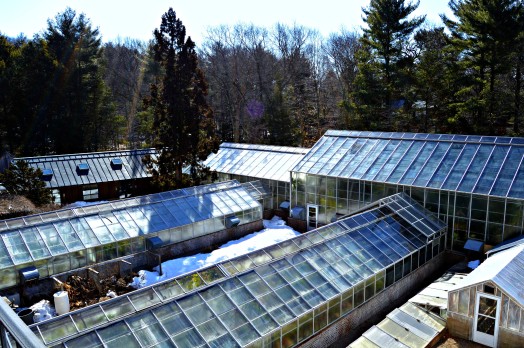 Since this wretched winter insists on hanging on, abusing us with record-breaking snowfall and damning us with ice dams and arctic blasts right into the end of March, I’m starting to get a bit antsy for greenery and flowers and temperatures above freezing.

This month came in like a lion and it looks like it will go out like a mighty fierce lamb, one that’s been taking note of how the lion rolls and has decided to grab a piece of that action. This is March throwing the worst of itself into every day, getting a bit above itself if you ask me, as it swaggers around like it’s Dante’s last circle of hell and we are merely the hapless sinners submerged in an icy lake, to suffer the cold for all eternity.

This drama queen, for one, decided to take a break from all eternity and head over to the Margaret C. Ferguson Greenhouses at Wellesley College, just for the chance enjoy the warmth and humidity while admiring the thousand or so species the 16 greenhouses hold. And lately, I haven’t taken those 16 greenhouses for granted ever since I heard that a major reconstruction, which will include tearing down the five main houses, is in the design phase of what the college calls The Global Flora project. The project’s goals are to replace the aging structures, which even a casual observer can tell need help; supply new housing for the school’s botany museum objects of artistic and scientific interest; to add an interdisciplinary science research and teaching component to the greenhouses; and to serve as an example of sustainable design.

All this will take time, as in construction won’t begin for perhaps as long as a year from now, so don’t hold your breath. And don’t fret about the over 130-year old Durant camellia, the last of four surviving camellias given to the school by its founder, Henry Durant. (Two others were lost in the great fire of 1914, and another  was removed from the greenhouses at some point.) The camellia will stay where it is, and the project will be built around it. In addition, Gail Kahn, Assistant Director of the Botanic Gardens, says “the greenhouses will remain available for the college and the community.”

Top Ten Things to do in Wellesley