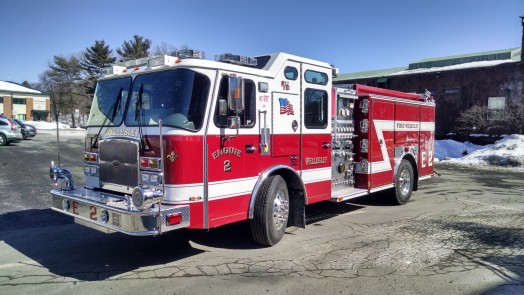 The Wellesley Fire Department received its new engine on Friday and expects to have the rig in action within a couple of weeks once training and equipment mounting are set.

Fire Chief Rick DeLorie says the 2015 model made by E-ONE features the latest systems that enhance firefighter safety,  with an anti-roll device, air bags, back up camera, anti-lock brakes and an emergency braking control on the passenger side. The engine, which boasts a 750-gallon pumper, has a fast and efficient foam delivery system for putting out vehicle fires, and that’s important given the amount of ethanol used in fuel today, DeLorie says.

The new engine, which costs a bit under half a million dollars, replaces a 1991 model that has been unreliable. Given the number of calls that the department responds to — nearly 4,000 in the fiscal year ending in June 2013 — reliability is key. Protocol calls for either Engine 1 or 2 to respond alongside ambulance service for any medical calls.