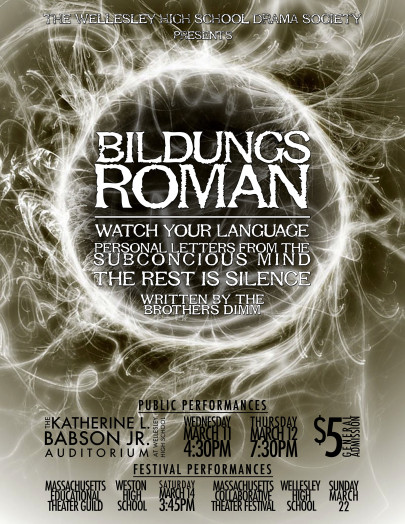 The Wellesley High School Drama Society presents something different this week: A play called  Bildungsroman that its promoters say “promises to provide humor, darkness and entertainment for youth and adults.”

Students under the direction of WHS drama teacher Stephen Wrobleski have been working on the play for the past 4 months.

The show’s title comes from the German word “bildungsroman,” which is a type of novel concerned with the education, development, and maturing of a young protagonist. Credit for the collaborative script has been given to “The Brothers Dimm”: Fairy tales were used as the starting point while the students’ collective creativity took hold.

Bildungsroman will be presented as three separate vignettes with common plot lines and themes woven throughout.

Bildungsroman will be performed this week at the WHS Katherine L. Babson Jr. Auditorium and at two drama festivals. Performance dates and times are: Wednesday, March 11 at 4:30 p.m. and Thursday, March 12 at 7:30 p.m. General admission tickets will be available at the door for $5.

The production heads to Weston High School on Saturday, March 14 for the Massachusetts Educational Theater Guild Festival where Wellesley and six other schools (Boston Arts Academy, Norwood, Billerica, Acton-Boxboro, Weston and Lawrence) will perform their pieces in front of judges and their theater peers. The festival begins at 8:30 a.m. with Wellesley performing sometime around 4:30 p.m.