Wellesley police have confirmed that a 35-year-old landscaper who working at a residence along Morses Pond drowned after overturning a canoe in the water early Tuesday afternoon. The name of the man, whose body was recovered, is not being released until after family is notified.

A co-worker from the private landscaping company called in the incident at 1:17pm, having seen the man flailing near the boat; no foul play is suspected in the death, though the incident remains under investigation. 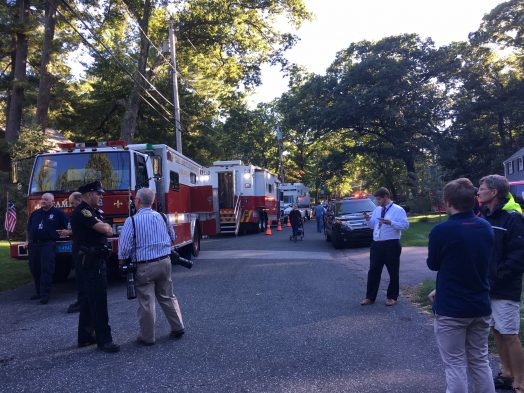 The man and canoe were found about 50 feet offshore, where water is about 15-feet deep. Some of the man’s personal effects were found in the water nearby. The search and recovery were made challenging by milfoil weeds below the surface.

Wellesley Police Lt. Marie Cleary spoke with the press after the man’s body was found (pardon the tough audio).

3:13 pm, THIS UPDATE from a Wellesley Police Department spokesperson, who is on the scene at Morses Pond:

“There was a male party, a landscaper working at a residence on College Rd. He took a canoe out onto the pond shorty after or around 1 pm. At some point he ended up in the water. We are still trying to determine how that happened. When officers first arrived, the canoe was overturned, and some of his personal effects were located in the water. The Wellesley Fire Department, Natick Fire Department, and Cambridge Fire Department Dive Teams are all working to recover that individual.”

2:30 pm: The Wellesley Police and Fire Departments, as well as other local and state emergency agencies, on Tuesday afternoon were searching for a missing person in a possible drowning at Morses Pond, where an overturned canoe was found.

Residents have been alarmed by sirens and emergency vehicles flocking to the scene for search and rescue actions. News helicopters and police helicopters have also begun arriving. “Scary stuff going on,” wrote one to us, and “I feel sick,” wrote another.

Morses Pond was the scene of a young boy’s death by drowning at the beach during 2013.

More on the current incident as we learn more…