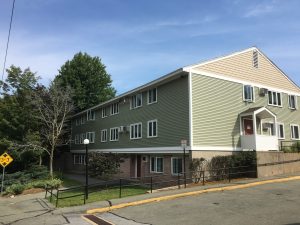 The Office of the State auditor has released its report on the Wellesley Housing Authority (WHA) and it was not impressed with the WHA‘s record keeping from January 1, 2014 through December 31, 2016. The State also said that regarding inventory, they extended the audit into May 2017.

The State listed findings related to administrative expenses; annual unit inspections; tenant eligibility; applicant waiting lists; procurement of goods and services; board governance; inventory of fixed assets; compliance with applicable reporting requirements; and the Authority’s management agreement with the Needham Housing Authority. It also put forth recommendations. Once the State made the Town aware of the findings, Wellesley was given the opportunity to respond. From there, the State responded to the Town. It all makes for some lively reading of the “you say this, I say that” variety.

Chair of the Wellesley Housing Authority (WHA) Maura Renzella said about the audit’s findings, “I appreciate the time and effort the Office of the State Auditor spent in Wellesley.  WHA has already begun to take action on the findings and will continue work closely with the Department of Housing and Community Development to ensure all of the suggested recommendations will be adhered to by the WHA.”

Here are the six findings and the recommendations:

Unsurprisingly, the State recommends that the WHA’s formal written policies and procedures be updated and an inventory of all ranges and refrigerators be conducted.

In its response, Wellesley said the system broke down when two former employees did not follow protocol for ordering and receiving appliances. The State stuck by its finding saying that “…the Authority’s inventory policy is deficient and should be updated to identify the staff member/s who will be responsible for monitoring the inventory process and performing year-end reconciliations of inventory records.”

2: The Wellesley Housing Authority did not properly administer the procurement of $113,206 of appliances and water heaters.

During the audit period, the WHA purchased refrigerators, ranges, and water heaters totaling $113,206 without using a competitive procurement process. The State says that as a result, the WHA may have spent more than necessary for these items.

Once again, the State recommended that the WHA update its formal written procurement policies and procedures, which require it to use competitive procurement, as far as possible, for goods and services.

Wellesley pushed back on this one saying, “We respectfully disagree with this finding for a couple of reasons. In January of 2016, [the] Facilities and Modernization Director . . . undertook an exercise to obtain quotes from various vendors for refrigerator purchases. He successfully obtained quotes from Sears ($529.99 per unit), Frigidaire ($579.00 per unit) and Jarvis Appliances ($478.00 per unit). The quote offered by Jarvis Appliance was the lowest we obtained. Jarvis is a local appliance dealer and the Housing Authority has done business with them for some time now due to their low prices and very good customer service. Additionally, we are not certain on a year-to-year basis how many refrigerators, stoves, or water heaters we require as it varies considerably. WHA does not have adequate storage space to carry out a bulk order. We need to do these orders on an as needed basis. With respect to water heaters, these get replaced usually on an emergency basis. It simply is not practical to perform procurement in emergency situations; and indeed public entities are allowed to respond to emergency situations to safeguard resident or public safety or well being without adherence to the procurement policy.”

The State, however, was intractable in its demands for documentation and updated procurement policies and basically accused the WHA of poor planning saying, “Although the Authority asserts that it is not certain from year to year how many refrigerators, stoves, or water heaters it will require…it prepares an annual budget that identifies a specific amount of money it has for purchasing these items. In its budgets during our audit period, the Authority anticipated significant appliance and water heater expenses during each fiscal year. The Authority exceeded its budgeted estimates for appliances every year and for water heaters one year. From the proposed budgets, the Authority had a reasonable estimate of items that might be purchased each year; thus it could have obtained quotes to ensure that it received the most economical price. It could have obtained quotes for items as needed, removing the need to store any items or purchase on an emergency basis.”

3: The Authority did not maintain housing inspection reports.

The State said, “During our audit period, the Authority did not have DHCD-required annual inspection reports on file for several housing units. When units are not regularly inspected, there is inadequate assurance that they conform to state and local minimum standards for safe and sanitary housing.”

The State found that in 2014, 18 units out of a sample of 25 did not have inspection reports on file. However, by 2016 the number of missing reports had dropped to 5 units out of the same sample of 25.

Once again, for the State it was all about having formal written procurement policies and procedures and sticking to them. Wellesley pointed out that going from 18 missing inspection reports in 2014 to only 5 in 2016 was a trend in the right direction. The WHA also cited heavy snow and ice removal needs, which sucked up the time of maintenance staff, and noted that some residents successfully avoided the annual inspections for various reasons such as illegal occupants, hoarding, or poor housekeeping. The good news: WHA obtained 100% resident inspections for 2017.

The State basically said that while that was all well and good, you really simply must “…establish a policy that details the inspection process…”

4: The Authority did not properly administer its rent redetermination process

The State said that by not performing the required rent redeterminations or obtaining required information from its tenants, the Authority creates a higher-than-acceptable risk of overcharging or undercharging tenants for their housing or of providing housing to individuals or families whose incomes may make them ineligible.

In a sample of 25 tenants, the State found discrepancies in 11 tenants’ cases ranging from a lack of documentation to support income to a lack of documentation to verify eligibility for family housing, medical expenses, and dependent child deductions. In addition, the State found that six tenants living in housing for elderly tenants were allowed a $400 deduction from their income that is only supposed to be provided to tenants of family housing. (Since the State’s finding, that $400 family credit mistakenly given out to the elderly residents has been adjusted and the WHA has hired a consultant to perform a comprehensive file review to identify any remaining issues.)

The State recommended implementing policies and procedures and ensuring that the staff adheres to them.

To that, the WHA assured the State that the current property manager has things well in hand after “…we underwent a purge of files during the latter part of 2016 that was done by a now former employee in which a number of pieces of income and expense verifications were removed. Our staff has stabilized at this point and we look to the future with optimism that all documentation will always be in the files.”

5: The Authority did not maintain its waiting list information or obtain all the required information from housing applicants in DHCD’s prescribed manner

Instead of maintaining the required permanent, hardcopy program waiting list ledgers, the WHA maintained this information electronically without obtaining a DHCD waiver of the requirement of hardcopy ledgers. The WHA also did not always obtain all required information from applicants, which the State says can lead to tenants being incorrectly offered housing ahead of other eligible tenants.

The State said that the “WHA should assign an employee the responsibility of accepting applications and ensuring that each application complies with DHCD regulations.”

For its part, Wellesley said that leasing staff has been properly re-trained about the State’s requirements, and that the previous oversights “…had no bearing on any applicant’s placement on the waiting list.” The Authority also cited having a heart as the reason that judgment calls are sometimes made: “Landlord references are at times quite difficult to obtain. In the majority of cases, we are able to procure the landlord reference checks without much problem. There are situations that arise where an applicant provides a listing of their prior landlords, and then we discover that these individuals no longer own the property, their mailing addresses have changed, or we simply cannot contact them. I am sometimes called upon to make a judgment on behalf of an applicant who has done everything correctly only to potentially have the whole process grind to a halt or end because of the landlord check. I am happy to report that we adhere to the requirement of ordering landlord references, but I will not necessarily deny someone housing because we cannot locate prior landlords.”

Nevertheless, says the State, it’s all about the documentation policy and the administrative oversights that the WHA simply doesn’t have in place or in practice to the State’s satisfaction.

6: The Authority’s board of commissioners did not properly administer its management agreement with the Needham Housing Authority

To that, Wellesley basically said that it was an oversight and that “The agreement that was signed back in 2013 was the exact same agreement that had been signed previously. Since there were no changes to the agreement, there was nothing for DHCD to review as they had apparently approved prior agreements.”

To which the State said, look, you’ve got to send us the management agreement to DHCD for review each time it is to be renewed. End of story.

And that is indeed the end of the story. The State has demanded that the WHA submit all Cover Your Ass paperwork every time, all the time, no excuses.