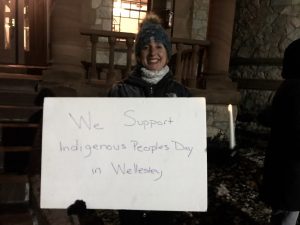 In late winter, a large group of World of Wellesley (WOW) supporters, led by WOW President Michelle Chalmers, met in front of Town Hall to hold signs and show their support of a citizens petition to honor Indigenous Peoples Day in Wellesley on the second Monday of October in place of Columbus Day. In response to WOW’s call for support, over 400 people who live and/or work in Wellesley signed the petition.

The petition laid out in direct language the 30-year old organization’s reasons for wanting the change and read in part, “Our Indigenous friends and neighbors consider changing Columbus Day to Indigenous Peoples Day as an important first step toward acknowledging the genocide of millions of their ancestors and the theft of their homelands, that began with the arrival of Columbus, as well as a recognition of Columbus’ role in the kidnapping and enslavement of millions of African people. It is a meaningful symbolic gesture to begin addressing the pain caused to Native Peoples by the many years of celebrating Columbus as a hero.”

On January 30, 2019, the the petition, which had been added to the Town warrant, was presented to Advisory by a group of seven supporters. When it came time to vote Advisory committee members came in as  four in favor of changing in Wellesley the second Monday in October from Columbus Day to Indigenous Peoples Day, seven against, and there was one abstention.

At  the February 10, 2019 Board of Selectman (BOS)  meeting, Vice Chair Marjorie Freiman addressed the BOS and asked that the Board consider taking a lead on communicating WOW’s efforts townwide. Freiman then reached out to WOW and asked them to consider withdrawing the petition from Town Meeting.

Freiman’s idea is to get the Board of Selectman to partner with the Indigenous Peoples Day Committee to provide opportunities for public conversation, presentations, and gatherings. These opportunities would help ensure that everybody in the community has the chance to express their opinions on the issue.

WOW and the Indigenous Peoples Committee agreed to withdraw the petition from Town Meeting. Chalmers in an email said, “A very difficult decision was made to withdraw the petition from Town Meeting, for now, and pursue the partnership with the Board of Selectman immediately. We have requested to be put on their next agenda to solidify the partnership and move forward with the intent that the Board of Selectman pass a resolution to honor Indigenous Peoples Day on the second Monday of October. We will work together to have public forums and community dialogue.”

Across the country according to Pew Research, “Columbus Day is one of the most inconsistently celebrated U.S. holidays. It’s one of 10 official federal holidays, which means federal workers get the day off. And because federal offices will be closed, so will most banks and the bond markets that trade in U.S. government debt (though the stock markets will remain open).”

In New England, the state governments of Massachusetts, Maine, and Connecticut give their workers Columbus Day as a paid holiday. New Hampshire government offices are open but public schools close for the day. The state Vermont has officially recognized the second Monday in October as Indigenous Peoples Day, but the day is treated as just a regular old weekday, with government offices open and public schools in session. In all, according to the Council of State Governments’  Book of the States, only 23 states (plus the District of Columbia, American Samoa and Puerto Rico) give their employees the day off with pay.

Four states celebrate Indigenous Peoples Day instead of Columbus Day — Alaska, Minnesota, Vermont, and South Dakota (which calls it Native American Day). Nevada celebrates indigenous people on a different day than Columbus Day, which was last recognized as a State holiday in 1992.

Community read: All the Real Indians Died Off