Lussier, along with the Redistricting Team, put forward a plan he said would realign districts to accommodate upcoming housing construction projects. In all, there are 10 developments totaling almost 700 units expected to be built. The Great Plain Avenue project with 44 units, under construction now, is one example.

Although the meeting was not about the larger School Building Committee (SBC) project to rebuild Hunnewell and rebuild either Hardy or Upham, Lussier said, “we know we have to redistrict as part of that…Our goal tonight is to talk about the redistricting maps to make sure everybody understands the methodology that was applied.”

The redistricting team, some of whom were in attendance, is made up of Cindy Mahr, Asst. Superintendent of Finance and Operations; Deane McGoldrick, Transportation Director; Jeff Dees, Upham School Principal; Charlene Cook, Hardy School Principal; Matt Kelley, School Committee rep; members from the AppGeo consultant staff, consultants hired to assist in the redistricting effort; and one parent representative from each of the seven elementary schools.

A hot-button issue for attendees was walkability and students having to cross Route 9, something the current districting requires they do now, and something that isn’t going to go away with the new plan. One parent said, “It seems to me the worst possible scenario ” that kids will have to cross Route 9 to get to school.”

A parent and former police officer in the crowd took issue with the idea of what’s used to define walkability. “It’s not just distance, it’s safety,” he said, pointing out that many of the secondary roads in town on walk-to-school routes have no sidewalks. “Kids and cars sharing the road is a recipe for disaster,” he said.

You can see each of the four redistricting maps here, along with the entire redistricting presentation. The presentation drills down extensively into enrollment reports over the past twelve years, capacity numbers, how student locations throughout town were geocoded, and more.

Each map includes an evaluation of walkability, drivability, and projected capacity. The seven parent volunteers on the committee, one from each elementary school, provided legacy knowledge on natural neighborhood boundaries and how they might be kept intact.

All numbers in the presentation are based on the baseline assumption that each of the elementary schools will have 18 sections and that there will be balanced enrollment across all districts while achieving district classroom guidelines. Those guidelines are 22 students per class in K – 2 and 24 students per class in grades 3 – 5. Wellesley’s enrollment projection numbers are here.

Next up: on Feb. 11, one redistricting recommendation per school will be made to the School Committee.

Any redistricting plan still will have to be presented on the floor of Town Meeting.

“The real goal is to create parity in enrollment,” Lussier said. “There will be disruption for some families.”

And such disruption is the crux of the issue. The mood of the crowd was at times chilly, particularly around the issues of students starting at one school and being redistricted to another.

Here’s a survey about the redistricting issue. All residents, not just those with current school-age children, are encouraged to fill out the survey. 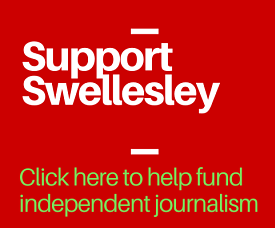