Thank you to environmentalist issues writer and guest columnist Ronda Yeomans for the following post on the climate change demonstration that recently took place in Wellesley.

It was a warm and humid afternoon in Wellesley, with dark skies threatening rain which never arrived.  At the top of the hill in front of Town Hall, 10 mysterious figures, cloaked entirely in blood-red, appeared like a line of avenging angels in stark relief against the brownstone, green grass and trees. Their monk-like robes and scarves were strangely complimented by Victorian-era gloves, veils, and headdresses adorned with red roses. Red masks had been added due to the pandemic, so only their eyes and foreheads could be seen, and those were covered in clown white makeup, their eyes and brows accented in black. Slowly, silently, the grim, Greek chorus moved as one, effecting gestures and expressions of intense grief, deep love, forlorn despair, defiant rebellion, and steadfast resolve. Passersby could not help but be mesmerized and mystified by this very odd and disturbing sight.  The “Red Rebels” moved in silent, expressive, and unified formation down the hill and across the lawn…

Eleanor Yeomans is a new member of her local chapter of the Red Rebels. An Environmental Studies major at Mount Holyoke College, Eleanor combines her passion to save the earth with several years training in dance and tae kwon when she performs at a Extinction Rebellion climate emergency protest. Eleanor laughingly admits she first became interested in the environment because her closest friends’ mom, a science teacher, was always explaining “things about the environment and what we could do to help. Many activities both with these friends and her UCC church, such as volunteering at an organic farm, explaining styrofoam recycling to folks on Earth Day, and going to climate protests, fueled her enthusiasm. Eleanor finds spending time in nature also puts her in touch with her spirituality. Working to impact the environment, planting trees for example, can be hard and dirty work, but she says it feels good to do good. 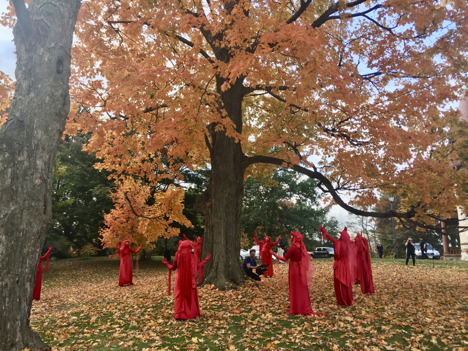 The original “Red Brigade,” grew out of a street performance troupe in Bristol, England in the 1990s. First appearing at political protests in 2001, they joined the Extinction Rebellion climate emergency protest movement in 2019. Other Red Brigade/Red Rebels performance troupes have been formed in countries around the world. Symbolizing blood, their red costumes suggest that we are all united by a common humanity. The red also signifies the countless, unnecessary deaths of too many people, and whole species of creatures, due to the climate emergency.  Red brings to mind immediate danger and alerts on-lookers to the urgent and deadly nature of global climate change. Red also makes folks think of “Stop,” as in “Stop and think,” “Stop polluting,” “Stop destroying the earth,” and “Stop killing species.” The costumes almost completely cover their skin, lending the illusion of statues when the Rebels assume postures in tableaus. To Dr. Who fans, they are a bit too eerily reminiscent of the “Weeping Angels.” This dramatic, visually stunning, silent protest is the perfect counterpoint to the mood of typical protests. Having both sorts of experiences one after the other makes each one more striking and hopefully, more effective.

A raucous, rebellious, brass band could be heard approaching from the distance. The unpredictable embellishment of their spontaneous jazz improvisations advertised their radical intent.  About 100 young people and families, mostly high schoolers and their adults, were following the seemingly triumphant band from Wellesley High School past the Town Hall and on down the busy street before coming back to Town Hall.  The protesters carried signs and banners demanding action against the climate crisis. They chanted slogans and clapped and waved to draw attention to their cause. Their flags bore a stylized graphic of an hourglass which included a large letter “X.”  The concerned students of Wellesley High School had contacted the Extinction Rebellion climate crisis protest group for help and all of them had descended on Town Hall at once. They even brought their polar bear.

With all the excitement of the noisy and somewhat chaotic protesters arriving, the Red Rebels first stood vigil over the event, but then silently receded almost imperceptibly into the back ground and out of sight.  The students gave impassioned speeches about the drastic state of the environment, the enraging lack of any real intervention by government, the heartbreaking losses of hundreds of species of creatures lost to humans’ carelessness, and the terrifying expectation of ongoing death and destruction in the all-too-near future. They exhorted us to personally take action now to change our own wasteful behavior, stop corporations and governments from pillaging natural resources, and to work together with other countries to heal our traumatized and ailing world.

Specifically, folks were tasked with urging Wellesley Town Meeting members to vote ‘Yes” on Article 12.  This would have town agencies increase their efforts to address the climate emergency by taking steps locally, and by reporting back to the town each year.  This is hoped to provide some accountability in order to increase the likelihood that policies will be changed so that the town’s carbon footprint will be decreased rapidly.  The protesters encouraged onlookers to sign the large, cardboard coffin to be presented at town meeting, and to urge others in the community to talk to their town meeting members as well.

After the speeches, the event was ending with the crowd singing some encouraging songs, when some looked up and saw the Red Rebels had reappeared. They were standing gazing up at a magnificent maple tree which towered over the group.  The silent Rebels moved from postures reflecting great love to great sorrow and seemed to express feeling shared by all that day.  The massive maple’s leaves were a stunning, warm, orange-gold and the setting sun lit them from behind with an other-worldly glow.  The Rebels lifted their arms in what appeared to be adoration and perhaps unity, with each other, with the maple, with the environment, and  with the earth.  I felt hopeful, filled with purpose, and surprisingly, at peace.