The goal of the Boston Harbor Now is lofty. The group, dedicated to keeping Boston’s waterfront open and accessible to all through its Harborwalk initiative says on its website, “First and foremost, Harborpark is designed to guarantee public access to the unique environment along the Boston Harbor, while encouraging balanced growth along the entire waterfront.”

For over thirty years they’ve worked to establish a 43-mile linear, uninterrupted walkway along Boston’s shoreline, connecting Boston’s waterfront neighborhoods to Boston Harbor and each other. Extending from Charlestown to South Boston, the park is a mostly-connected path system that is still a work in progress in a few parts.

We’d heard about the spectacular views of downtown Boston from Piers Park in East Boston (known as Eastie by many). Our sources were right. Piers Park in the East Boston Shipyard area could be the best-kept secret of the Boston Harborwalk area. We put Piers Park into our GPS, about a 15-mile, 45-minute drive from Wellesley Square, and headed out on an early spring afternoon. We found parking without too much trouble, but be warned that the signs that say 2-hour parking only are serious about it. Tow lots are aplenty in East Boston, and seemingly all full.

We walked out to the end of the pier and took in the amazing view of the city. Sailing teams buzzed about against a backdrop of skyscrapers, while cargo-handling ships moved in and out of the harbor. Looking up, we saw not only airplane traffic as it flew toward or away from nearby Logan Airport, but the stunning number of luxury condos that are going up, up, up along the waterfront. Piers Park may be a little-known gem, but Eastie has been discovered by young people who can hop a water shuttle for a quick ride into Boston, or access the nearby MBTA Maverick stop as a first leg to pretty much wherever they want to go. Empty nesters from the suburbs have caught on as well, and we saw what looked like a few potential transplants wearing hardhats and examining blueprints as they toured the latest from-the-ground-up project. Gentrification of this working-class area is in full swing.

As we walked along the pathway (here’s a handy map of the entire Harborwalk)  we found LoPresti Park, a beautiful spot with  a playground, a very cool ping pong table (bring your own paddles and ping pong balls), a summertime splash park for the kids, and an amphitheater area for concerts and other performances. And the sights kept on coming. The untrammeled views of  the Financial District, Beacon Hill, Charlestown, the Zakim Bridge, and more, right from the water’s edge, were stunning. 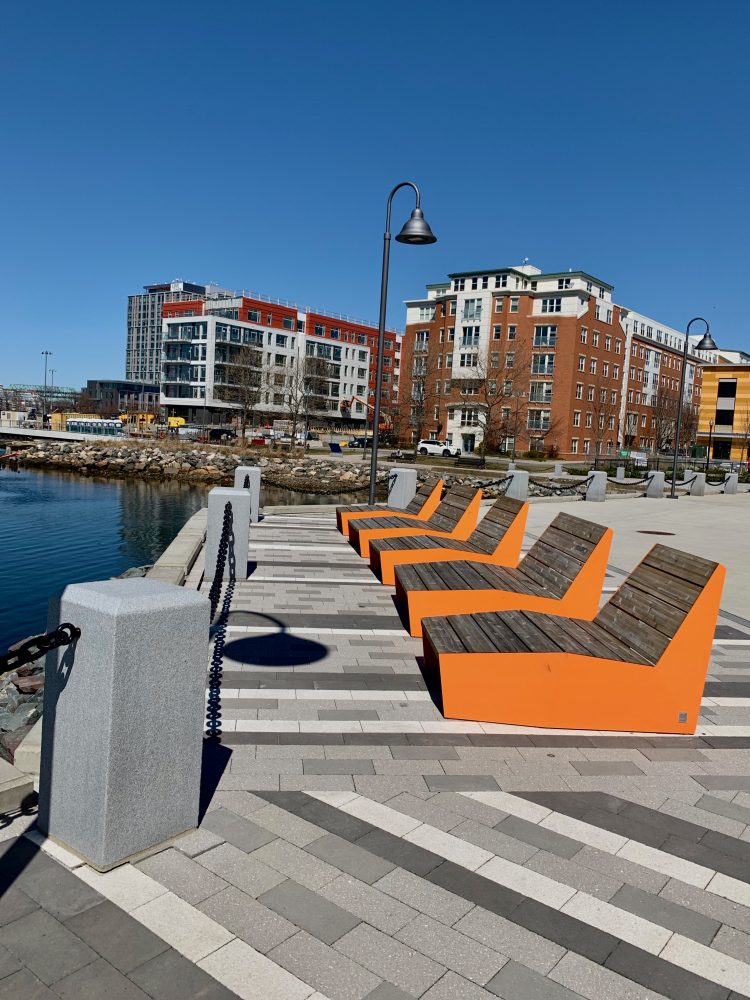 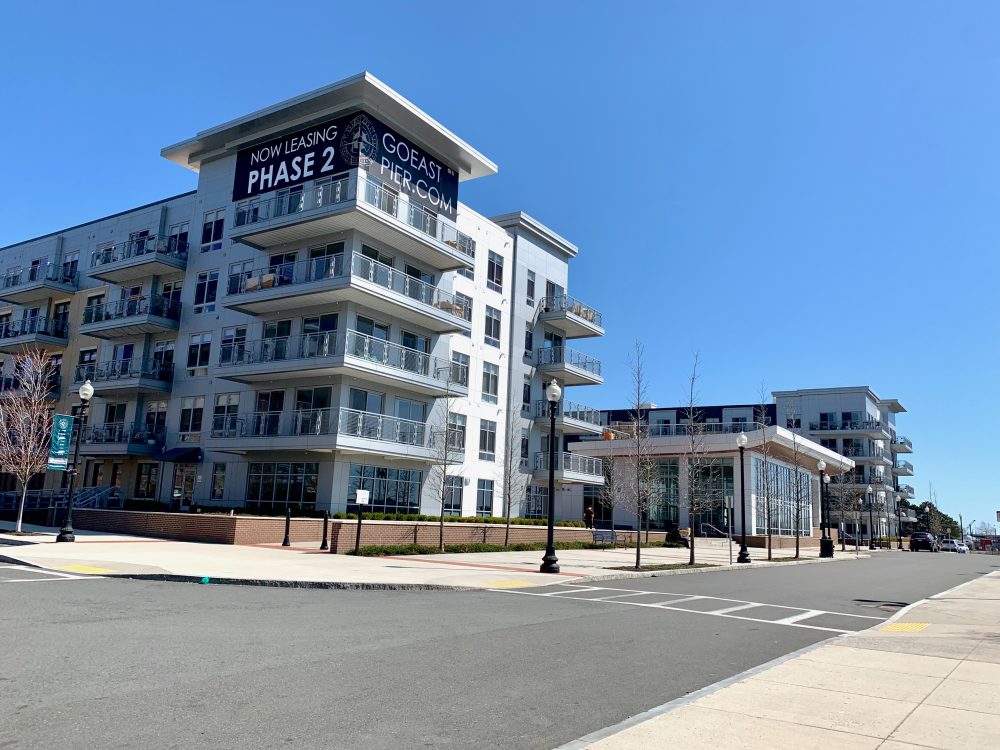 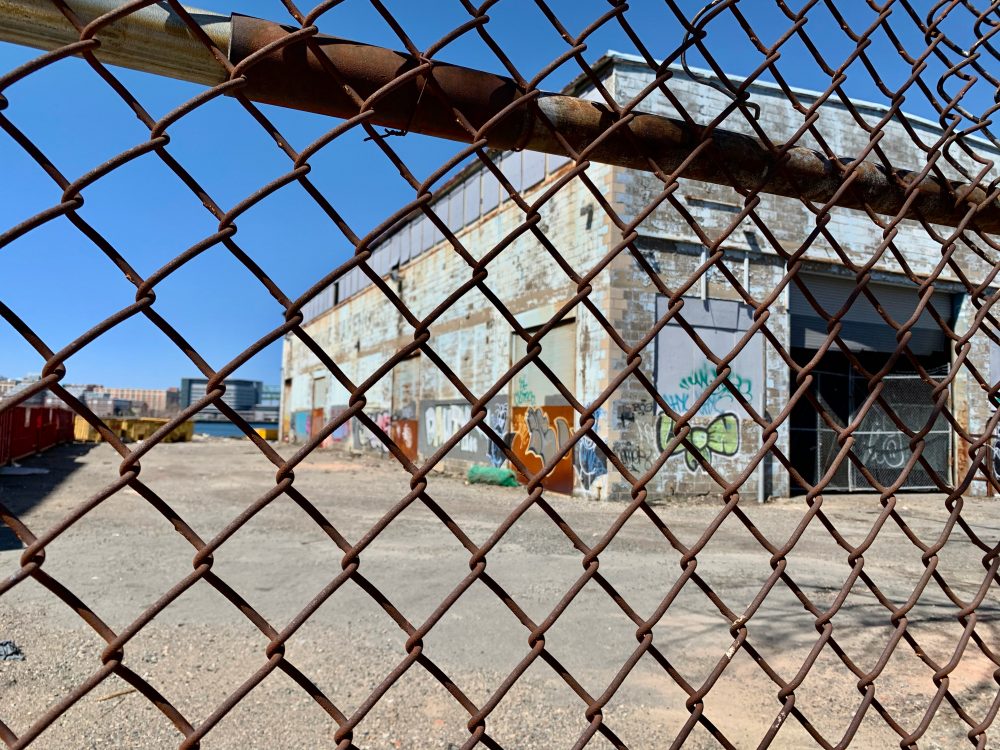 Because we’re kind of nosy, we did a full exploration of the neighborhood and found shopping districts, pocket parks, memorials to the area’s military heroes, libraries and schools, the famous Santarpio’s Pizza restaurant, as well as a neighborhood controversy hot-spot, the planned site of an Eversource Substation to be located at the edge of Eagle Hill (just below the Eagle Hill garden pictured above). Residents have voiced objections to the project due to safety concerns because the area is subject to frequent flooding. WBUR has excellent coverage of the story.

We left Eastie wondering where we’d been all its life, feeling like we’d barely scratched the surface of this neighborhood we’ve flown over so many times but never parachuted in on. What about lunch at The Reel House? Or an authentic Peruvian meal at Ricon Limeno? How about a visit to the Madonna Queen of the Universe shrine?

We’ll be back to enjoy this part of Boston that felt welcoming and vibrant.