Bank branch to close in Wellesley

In an unusual twist for a town that boasts banks galore, a branch is actually leaving Wellesley Square. Cambridge Trust execs have notified account holders that as of July 12 the 40 Central Street branch will close for good. A branch in Portsmouth, NH will also be shuttered. Both the Linden Square and Lower Falls offices will remain open, along with the rest of the bank’s approximately two dozen locations.

Cambridge Trust came to Wellesley Square last June as the result of a merger with Wellesley Bank. As a Central Street fixture for 45 years, many in town will recall Wellesley Bank as a place where the candy flowed freely and friendly tellers were always ready to update a young person’s passbook savings account. Many of the Wellesley Bank staff stayed on once the merger went through and became Cambridge Trust employees. So now what?

Senior VP Kerri Mooney in a letter said, “I am pleased to let you know that our Wellesley Square team will continue to serve your banking needs from other locations within our banking office network.”

When one bank door closes, another one opens 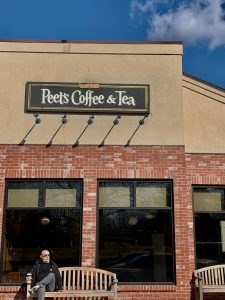 As we reported late last year Chase Bank, which burst onto the Wellesley scene in 2019 at 294 Washington St. (which used to house a Santander ATM), will be expanding its presence in town when it moves into the recently closed Peet’s Coffee & Tea location.

In the interest of balance or karma or something like that, we’re thinking a coffee and tea house would be just perfect in the Cambridge Trust spot.

Bank deal of the Century