The closing of the Central Street CVS late last year has paved the way for restaurant Black & Blue Steak and Crab restaurant to move in at 65 Central St. You could get a lot of different stuff at the CVS, but you definitely couldn’t get a $94 Grand Seafood Tower for four there.

We’ve reached out to Black & Blue for more details on its Wellesley Square, such as when it hopes to open.

Black & Blue has a handful of other locations, including three in New York and one in Burlington, Mass. The Burlington restaurant opened in 2018 within a Residence Inn hotel.

The Black & Blue eateries are part of a larger portfolio from restauranteur Charlie Fitzsimmons.

Menu items at the Burlington spot include appetizers ranging in price from $13 (pork belly) to $19 (crab and lobster fondue).  Entrees include seafood such as Black Grouper ($37, gulf grouper, artichoke, cipollini onions, kalamata olives, blistered tomatoes, scallion pesto, and black garlic vinaigrette) and King Crab (pricing on a “if you need to ask…” basis). Steaks range from a 9 oz. bistro for $29 to a $59 porterhouse or bone-in cowboy ribeye.

Black & Blue would add to the list of new restaurants expanding locals’ choices for places to eat in Wellesley.

Clothing retailer Johnny Was moving in

While we’d heard scuttlebutt earlier about a possible coffee shop going into 37 Central St., former home of Dellaria Salon (now at 67 Central), it now appears as though women’s clothing retailer Johnny Was will be moving in.

The retailer explains that “Johnny Was designs clothes that cross cultures and defy trends. With a bohemian spirit and a true sense of authenticity, we take our inspiration from anything that is beautiful, genuine and special…”

Among the items promoted online are a one-of-a-kind kimono for $2,600, colorful blankets for under $100, and jeans that start at about $180.

Johnny Was has stores across the country. Locally, the closest is at the Pru in Boston.

The parklet in Wellesley Square continues to be popular, though one of its most most-used features is now gone, replaced by more traditional tables and chairs. People have been asking us what happened to those spinny bird cage swings. The town says it was having some issues with the materials and maintenance (some of the pins & screws kept coming loose), so to be safe it took them down.

The town plans to review the parklet later this month to determine whether it will stay intact into fall. 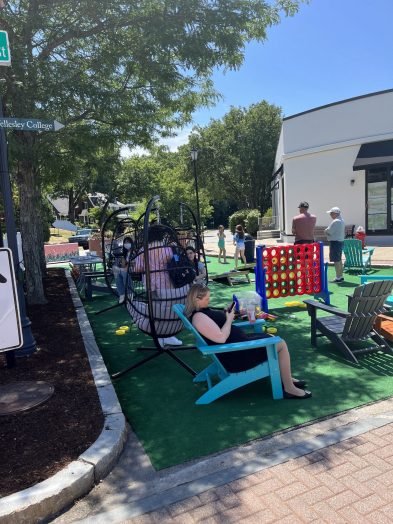 Needham Bank has announced that Arthur Zweil joined the Commercial Lending department as Vice President Commercial Real Estate Lender. He is responsible for evaluating, authorizing and recommending approval of commercial loans, as well as advising borrowers on strategies to manage their business’ finances. Before joining Needham Bank, Mr. Zweil worked at Boston Private Bank, then by merger, Silicon Valley Bank.

Separately, Needham Bank announced that Phillip Crotts has joined the Information Technology department as Vice President IT Security Program Officer. He is responsible for the maintenance of IT security functions and serving as the IT liaison for federal examiners and external and internal
auditors.