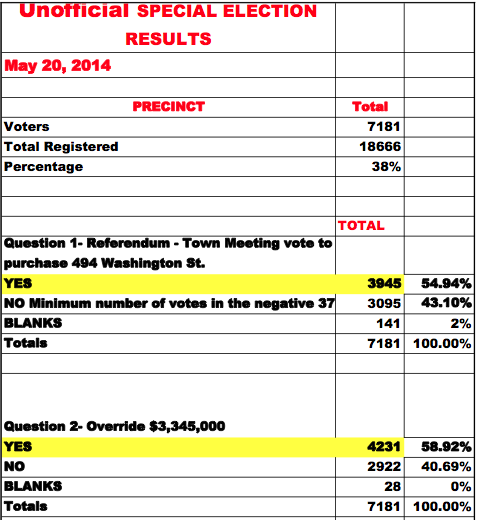 Wellesley voters on Tuesday okayed a $3.445 million tax override and the $1.365 million purchase of 494 Washington St., for the purpose of using it as part of a new senior center.

As one resident noted upon passing by the unofficial election results posted in Town Hall: “That’s consistent with the eyeball test [based on the number of Yes vs. No signs posted in yards around town]. That’s usually a pretty reliable indicator.” 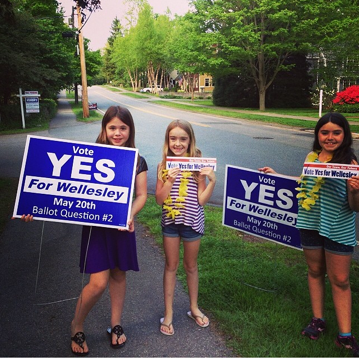 Overall, 38% of Wellesley’s voters turned out for Tuesday’s special election.

Those voting Yes on Question 2 to suck it up and support a boost in real estate and personal property taxes to fund public education and general government outdid those voting No by a count of 59% to 41%. Yes votes outnumbered the Nos in all precincts. It was the first override here in 7 years.

“Yes” supporters, including Wellesley Schools Superintendent David Lussier, gathered at the Italo-American Club on Tuesday night to discuss the issues and watch for results. 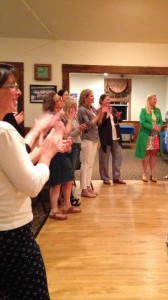 Lussier later issued a note to the community in which he wrote:

“I am excited to report that today, our community has once again voted ‘Yes,’ to support the Wellesley Public Schools and our commitment to provide a world class education to all of our students.  Today’s outcome provides the fiscal resources necessary to invest in key areas of our strategic plan such as early childhood education, closing achievement gaps, competitive compensation for staff, increased classroom supports for teachers, and efforts to align our curricula and programming with new standards and more complex expectations for students.

Today’s vote is the culmination of two years of work that began with a community-wide discourse that helped shape our vision for the future, which is now reflected in our FY2015 Budget.  This vote, however, was more than just an approval of critical financial resources.  It was also an affirmation that the ideas reflected in our strategic plan continue to have wide support throughout Wellesley…” 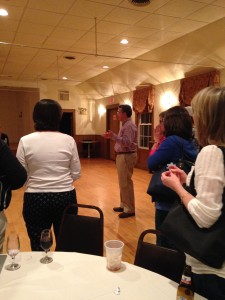 On Question 1, about whether to buy 494 Washington St., as Town Meeting had recently approved, the Yes votes beat the No votes 55% to 43%. Though according to a Townsman report on the election, those against the purchase say the fight’s not over.

(Thanks to reader AC for sending along the Vote Yes girls photo.)