The pre-Father’s Day “news” we broke on June 9 about a Wellesley dad named Scott Maney who placed a rather cheeky craigslist ad to sell off a trampoline that his kids barely used (“My Kids Suck: Skywalker Trampoline with Enclosure — 17×15 –$350 (Wellesley)) looks to be yet another viral story. This item seems to get new bounces  daily.

Since our original post, the ad has been picked up on social media sites such as Reddit (where it has elicited more than 1,100 comments) as well as many local news stations and the Huffington Post, among others. The dad who wrote the ad has been labeled everything from “bitter” to “hilarious.”

This week, Kiss 108 radio’s Matty in the Morning posted about the ad on his Facebook account. Also this week, the laughing heads at Good Morning America did a segment on the ad, and CNN straggled along with a piece this week, too, which means this has a good chance of stretching into 3 weeks of coverage. 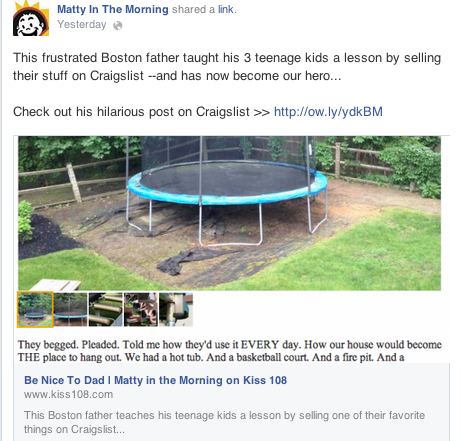 Where will it all end? Who knows.

As the ad dad noted to me: “Is the world that starved for interesting content? And the comments people make are absurd. From hero to I’m the worst parent in the universe. Somewhere along the way the universe has lost its sense of humor. ”

Since the term “viral” has gone viral in recent years we’ve seen a handful of Wellesley stories take off each year. In 2012, we had the You’re Not Special Speech and the Townsman broke the story of the man who found gobs of money inside a hollowed out book at the dump. Last year we had the Facebook Contract.

In 2014 we’ve had the dog rescue,  the Sleepwalker statue, and now the craigslist ad Dad. I think we’ve about hit our quota for the year.