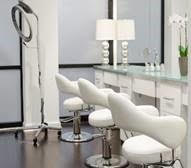 Karen Ricci says those “privy to Privi,” her new hair salon at 555 Washington St., in Wellesley Square, have had to be in the know up until now since she doesn’t yet have outside signage. She had a soft opening late last year before she added her team.

Now of course, with this post, the word is out about Privi, a Karen Ricci Salon.

Privi is Ricci’s first salon, but she’s a familiar face on the Wellesley salon scene. She’s been a stylist in town for 10 years, including at The Color Studio and Salon One. She’s also been active in donating resources to community causes.

Ricci renovated the downtown space to give it “an upbeat vibe” that includes plush seating and hanging blow dryers. She also mentions a new luxury haircare line called Kerastase and complimentary Olaplex treatments. I’ll leave that up to you to find out what those are all about…