CrepeBerry, a new Wellesley eatery that owner Amelia Childs says specializes in “accessibly vegetarian” fare, has opened in the space at 325 Washington St. that Dorset Cafe previously occupied for 10 years. I went for lunch on their grand opening day to see what it was all about as they settle in to the space.

If you were a Dorset fan, in a lot of ways you’ll feel right at home here. Childs bought the business from that owner, and so visually, things are certainly recognizable. Same tables. Same chairs. Same pastry display case. Same peeling paint. Same scuffs on the wall. This is no Wellesley gut-and-replace remodel job.

What’s different is the menu, of course. I tried out the Energy Bee smoothie (small, $6.50; large, $7.50), a blender-whirred concoction of strawberry, bee pollen, ginseng, and orange juice and found it delicious, plus it’s not something I would make at home since bee pollen and ginseng aren’t on my master list of groceries. 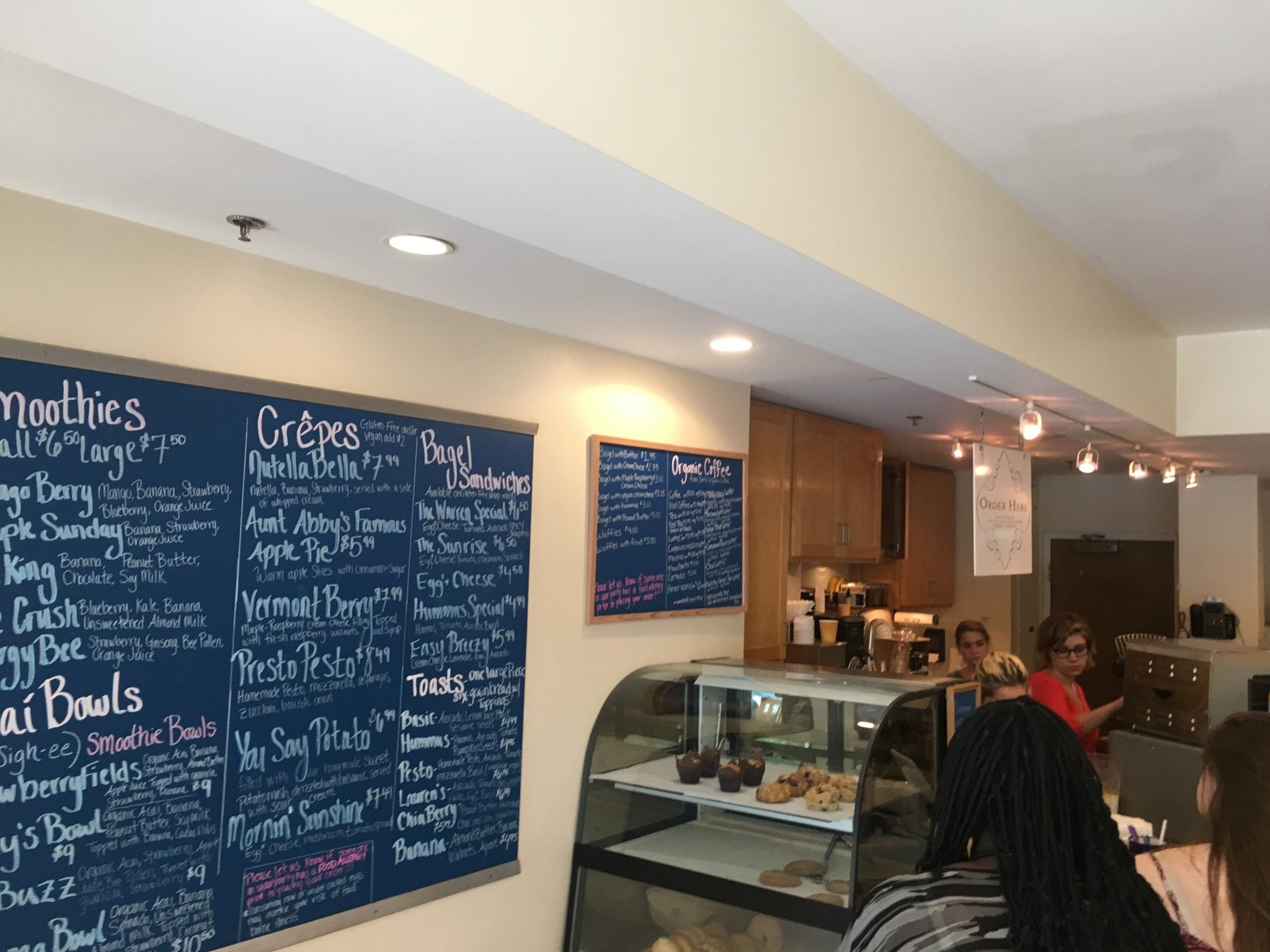 My lunch companion tried out The King smoothie, made with banana, peanut butter, chocolate, and soy milk, and gave it a thumbs-up. Although my smoothie was up in an instant, it wasn’t until after our meal was served that The King smoothie appeared, and even then I suspect it showed up at all only because I pointed out the omission to the server. The problem was quickly rectified, and we moved on the next part of our meal — crepes

I probably haven’t had a crepe since the 1990s, back when The Magic Pan ruled the corner of Newbury and Berkeley St. in Boston. I loved crepes then, and I love them now. The idea is so simple and the results are so predictably yummy, that I can’t understand how crepes ever went out of style. It all starts with a thin batter made with flour, eggs, and milk that is poured into a pan. Next, with a few flicks of the wrist and a practiced eye, the chef makes sure the batter cooks evenly, and then fills the crepe and folds it. Voila!

Based on the rave recommendation of an acquaintance who had just finished up her meal as I was coming in, I ordered the Presto Pesto Crepe, made with pesto, mozzarella, asparagus, zucchini, broccoli, and onion ($8.49). The pesto came with the strong basil taste I was after, but wasn’t overly garlic-infused, so that after lunch I felt that I could converse without offending. The vegetables were cooked al dente, not al mushy, and the portion size was just enough.

My companion went for one of the sweeter options and tried out the Vermont Berry crepe, made with maple-raspberry cream cheese filling with walnuts, raspberry and syrup ($7.99). He thought the cream cheese had a generous but not excessive raspberry flavor and commented that he hadn’t before come across the intertwining of the maple and raspberry flavors.

There are toasts available as well. A friend I bumped into there had just had the Basic Toast, which was one large piece of six-grain bread with avocado, lemon juice, and black sesame seeds ($4.50). Her comment: it was a little too basic and that next time she would try out something different. Perhaps the Hummus Toast made with avocado, tomato, pumpkin seeds, and black sesame seeds might satisfy the urge for those seeking toast adventure.

There six different crepes on the menu, 3 sweet and 3 savory; and six different toasts, 2 sweet and 4 savory. You can also get bagel sandwiches with dairy or vegan cream cheese options, butter, hummus, or peanut butter. In fact, this is a good time to point out that many of the menu items have vegan incarnations, and gluten-free crepes are available (both options run an additional $2).

Egg dishes are on the menu also, as plain and simple as egg and cheese ($4.50) or as fancy as the Easy Breezy, made with cream cheese, lavender, avocado, kiwi, and strawberry ($5.99). You can also get waffles, fresh fruit, chia seed pudding, and a yogurt parfait. Acai bowls are available as well, described as delicious smoothie bowls topped with granola and fruit ($9).

What? you gasp. No kale? Don’t be ridiculous. I would never send you to a restaurant without kale, if only because these days I couldn’t even if I tried. It’s sort of a restaurant invasive species, but a heathy one. So don’t fret, there’s a Kale Crush smoothie just waiting for you. The menu also features locally sourced coffee (Jim’s Organic), teas, and other drinks.

The service is extremely welcoming and friendly, even as they were working out first-day kinks. I’d say they were about as speedy as any restaurant is on day one and imagine that they’ll have the routine down in a couple of weeks as they get their kitchen legs.

As I left, a customer pointed out that there was a smudge stick by the door. Childs is not only the owner of CrepeBerry and Broken Grounds Cafe in Newton Highlands, she is also a Reiki master, and this much is true — Reiki masters do not open up a new restaurant without holding a smudging ceremony first.   So not only are the crepes delicious, the place has been whisked free of negative emotions, and good energy has been channelled in.

CrepeBerry will be open 7am-5pm Monday–Friday and 8am-4pm Saturdays and Sundays, with extended hours likely by fall.

Check out our Wellesley Restaurants page.