Nothing says “Welcome to Nature” more than having ants crawl up your legs. That’s the greeting a MassWildlife rep named Dan got as he began his fishing demonstration on a dock jutting into Sabrina Lake at Wellesley’s first-ever EcoCamp on Monday morning.

The free camp, organized by the Wellesley Conservation Council (WCC) and Wellesley Youth Commission, will teach middle schoolers about everything from fishing to plants to shelter-building to drone flying. Visits will include Mass Audubon’s Broadmoor Wildlife Sanctuary, Elm Bank Reservation, Morses Pond, the North 40, Wellesley College’s botanic gardens and more. “The overarching goal is to expose Wellesley kids to the outdoors around them, teaching them outdoor skills and local ecological awareness,” says WCC’s Matthew Hornung.

The camp is now the fourth such free summer offering from Wellesley Youth Commission, which for years has been delivering programs with the Wellesley Police Department, Wellesley Fire Department and Wellesley Public Media that are among the town’s best kept secrets.

I tagged along for the start of the EcoCamp, meeting coordinators at the Guernsey Sanctuary trail head on Winding River Road near the Wellesley-Needham border. WCC’s Pete Jones unloaded the area’s history on us as we awaited the arrival of a dozen campers, and he showed and told about the nefarious burning bush invasive nearby. Jones also explained that the man-made lake and surrounding woodlands are divvied up among residents, towns and the non-profit WCC (the dock we ventured to for the fishing demo is open to the public, which might not be readily apparent to someone exploring the trails along the lake).

Once the kids arrived and were suited up with WCC hats and Eco Camp bags, the education began. Jones and Horning warned about poison ivy (“leaves of three, let it be”) and ticks, and quizzed campers about vernal pools, one of which provided the backdrop during an introduction at which kids sat on slices of a 135-foot-high tree that had fallen in the area. A bullfrog croaked practically on demand. Bathroom arrangements were orchestrated on the fly, with the woods eschewed as a solution to Nature’s Call. 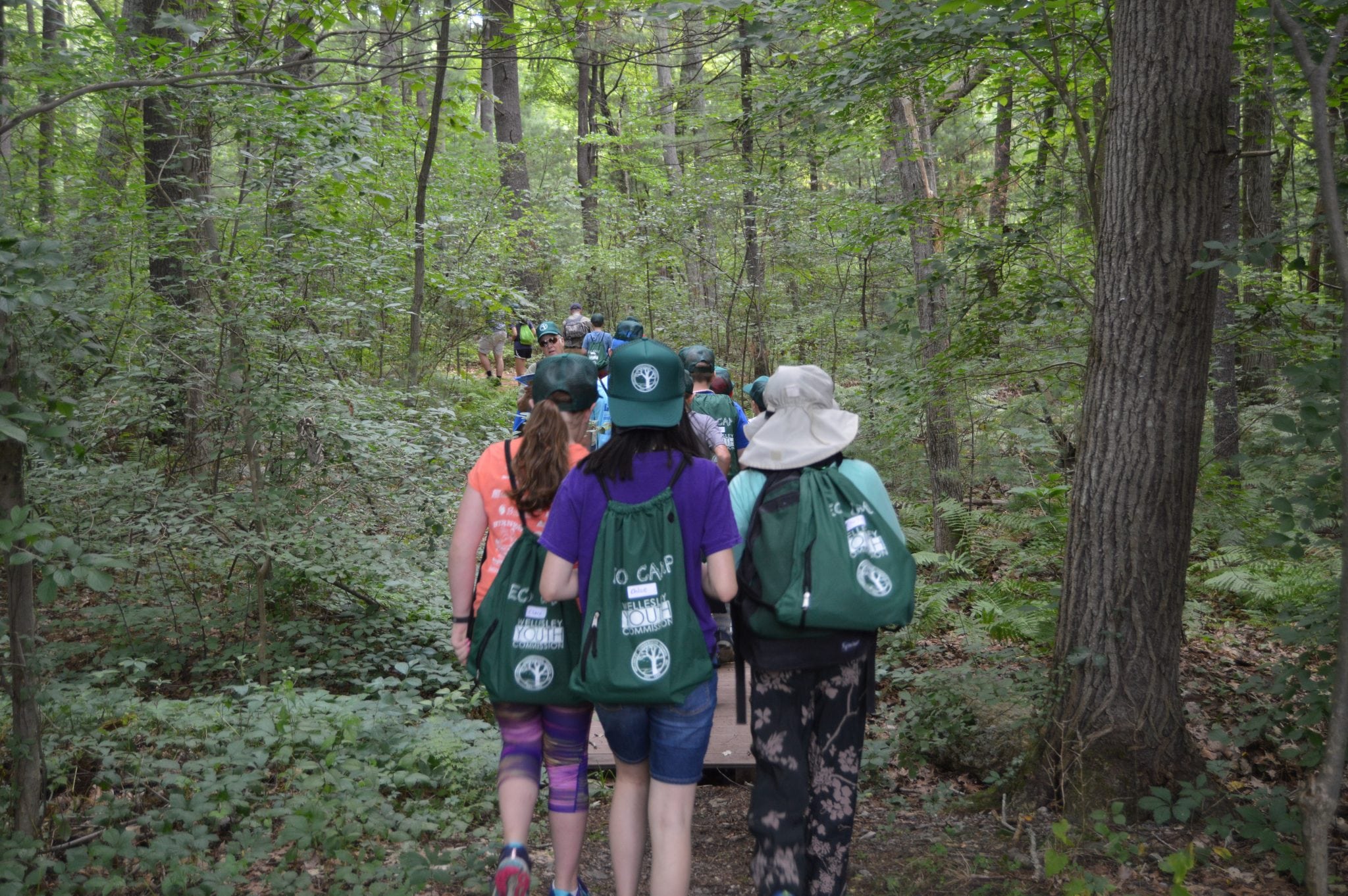 We then headed over to the aforementioned dock, where Wellesley Wetlands Protection Committee Chair Richard Howell doled out fishing pointers, such as not hooking yourself and not all standing on the same side of the dock if anyone caught a fish. He also schooled them on the types of fish they might find in the lake and how to safely remove a catch from a hook (wet your hands first to avoid messing with the slime protecting the fish’s exterior).

MassWildlife’s rep picked up the conversation from there, showing kids how to use fishing poles and answering questions about things like the pain level fish might feel if hooked (research shows it’s similar to the sensation you might have while numbed in a dentist’s chair). While he ran back to get bait, campers began casting bare hooks, and one girl snagged a sizeable sunfish almost instantly. Sure enough, everyone crowded onto that side of dock, though the platform stayed afloat as Howell assisted in the fish’s release.

That was my cue to head out, though I was a tad jealous of what the kids had in store for the rest of the week. 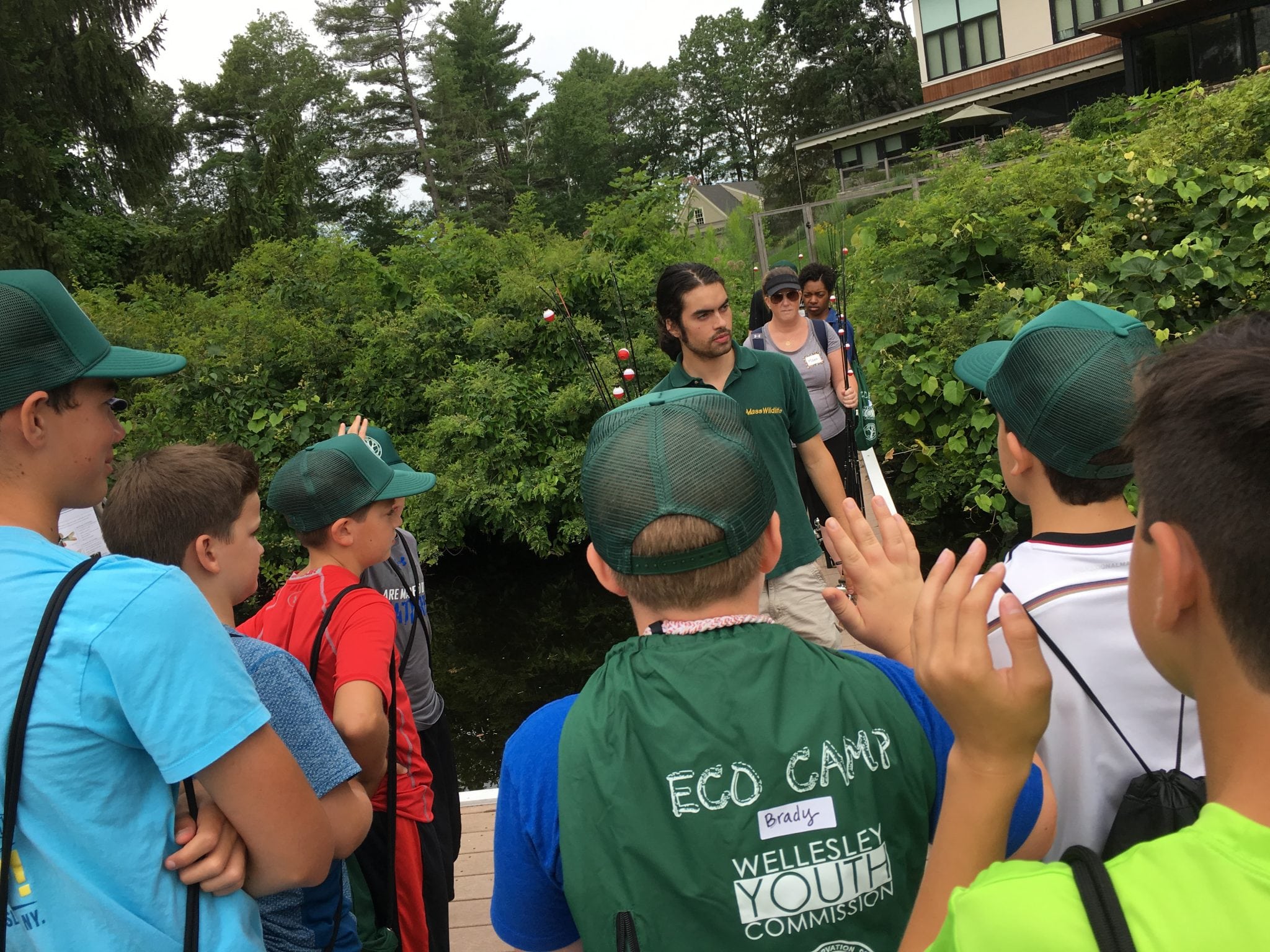