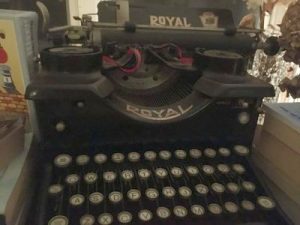 The call to take up words and defend the very bedrock of journalism came from no less an institution than The Boston Globe. Marjorie Pritchard, a deputy managing editor of the 146-year-old daily publication was fed up with the press as a whole being called an “Enemy of the People.” Taking a fight-back stance, she reached out to editorial boards nationwide asking them to join in a kind of write-in. The idea is that newsrooms would collectively publish editorials on August 16 denouncing what the newspaper called a “dirty war against the free press.”

What Pritchard has done here is ask for back-up as she leads an effort to push back against a bully. You know who that bully is, right?

In case you’ve been in parts unknown, unplugged, surrounded by family and friends, blissfully unaware of Tweets and tirades, here’s a brief. Earlier this month President Donald Trump said via Twitter that the press was the Enemy of the People. Again. Apparently, he noted with glee, the Fake News hates it, just hates it, when he trots out that Enemy of the People label. According to the president, Fake News journalists and their pesky fact-checking toadies at the copy desk “cause great division & distrust.” They’re responsible for war, too, the dangerous sick-os.

OK, maybe not The Swellesley Report. Because we’re so very local, the news we cover is about as real as it gets. We’re fly-under-the radar types who post about school events and other around-town doings. Hard-hitting journalism for us: “Will Wellesley College ban dogs on Lake Waban path?” A close second: “Local reporter (me) almost hit by car in Wellesley.” Yes, that’s almost.

As you already know, nothing much happens in Wellesley. That’s why you moved here and love it. That’s why you read Swellesley, to have this knowledge confirmed and to bear witness to our daily documentation of, well, the dailiness of a quiet community.

What’s important about this isn’t so much what we do, it’s that we can do it. Bob and I learned all about the sacred principles of a free and independent press at Boston University. He was a journalism major, I went for the major the less-focused types embraced, “Communications.” We learned all about the holiness of our calling and how freedom of the press was enshrined in the Constitution. When you get to the very end of that august document, keep reading. We journalist types are the ones covered by the First Amendment, the one that says, “Congress shall make no law…abridging the freedom of speech, or of the press…”

Heady stuff, to be backed up by historical documents and Congress itself.

Indeed, because of this back-up no one tries to stop us from publishing the weekly police log, or about car crashes, or the occasional tragedy that of course touches even our quiet corner of the world. We are a free and independent press, and it hardly gets more free and independent that what Bob and I do every day. 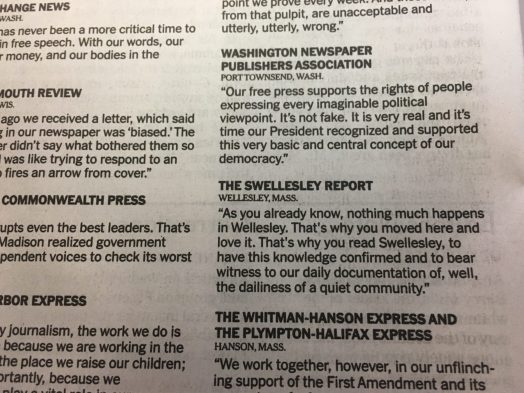 In fact, we started out doing it about 13 years ago literally for free, just a public service from two people curious about what blogging was all about, posts sent out over the internet to whoever might be reading. We started out by putting up a list of Wellesley’s sledding hills. Then we wrote about businesses opening and closing.  School plays, Little League sign-ups, pictures of the noteworthy or unusual — no story was too small then, nor is it now. Post by post we got more and more readers.

What started out as the “Hey kids, let’s put on a show” model of journalism eventually turned into A Thing, if I can be so immodest. Best of all, there was nobody around to stop us. We didn’t have to appear before the Wellesley Board of Selectmen for approval. We didn’t have to wring our hands and hope that Wellesley’s 240 Town Meeting members would vote yes on a proposal sanctioning our right to exist, just as long as we followed a few simple rules. We just started pecking away at our keyboards and sending our reports on the front-lines of Wellesley out into the world. We appreciate that thousands of you subscribe to Swellesley and follow us across our social media accounts.

Now we find our colleagues, especially those who report nationally and internationally, toiling in an Orwellian-type workplace, where their right to write is under attack, and the analogies get weird. In this world, journalists are Enemy of the People. Fact-checking is fake. Constitutional shrines are false idols. Go right ahead and tread on me, the Fourth Estate, right into the ground if you can get away with it.

To get all this to work, all you need do as an informed public is sit back, relax, open your hearts and minds and welcome the rise of the Fifth Estate: Propaganda. It’s a new branch of government that isn’t really a branch at all, it’s more something grafted onto a mighty trunk. That mighty trunk is Government Control.

Here’s how it works: start with a long-standing tree. Envision its branches, reaching out. Because those branches are healthy and strong, the massive tree stands tall and powerful. Now chop off the Legislative Branch of the tree. Next, chop off the Judicial Branch of the tree. Finally, the Fourth Estate goes, a Fake Branch if ever there was one, until finally we’re left with one thing standing — an Executive Trunk.

Careful, there. It’s a massive trunk, it comes with a lot of baggage, and it thinks it can stand alone. That form of government can’t be good for any of us.

Thanks to the New York Times (A Free Press Needs You) and Boston Globe (Journalists are not the enemy) for giving us some love in their editorials.

HOW TO SUPPORT SWELLESLEY:

MORE: The closest we get to Fake News