When a Wellesley cop sold his home at 19 Fife Rd., back in March, it came as no surprise that the big cape would undergo a major change. After all, the 4-bedroom, 2.5-bathroom house, which sold for $759K according to various real estate sites, had been kicking around since 1950. As we all know by now in teardown central, that many years on a house is almost a certain death sentence.

But the buyer in this case, an LLC out of Quincy, reportedly snapped up the home in the Fiske Elementary School neighborhood with the idea of rehabbing and reselling it, not tearing it down. Among the first moves by the buyer was to cut down dozens of trees. The removal of at least some of those trees was welcomed by Michael and Elizma Sexton, whose McLean Street home abuts and stands below the Fife Road house.  Their patio and backyard suddenly no longer stood entirely in the shadows.

However, Michael Sexton says that the tree cutting (and burying) and the amassing of truckloads of soil at the Fife Road home has also resulted in mudslides and streams of water into their backyard and basement. The Sextons say communications with the buyer and their builder has been a struggle since the start of the summer, and as a result neighbors have reached out to town officials for relief. They’ve also taken preliminary legal action in the form of a letter to the owner and contacted the press.

While town officials have visited the house, shaken their heads and expressed sympathy for the neighbors’ plight, they’ve said that the matter is more likely a civil one than anything the town can get involved in. The project has not triggered the need for the homeowners to apply for a special permit from the town or get any sort of official town review, as say an expansion of the home beyond its current footprint or erection of a retaining wall would have done. It has, however, perhaps cracked open the door for future zoning bylaws aimed at promoting more neighborliness.

Reaching out to town officials

The Sextons say the original builder (since replaced) seemed cooperative, and that the owner did show up to address the water runoff issue after a recent big storm. Mesh has been draped over the dirt hill and a screen has been stretched across most of the property to block water flow. The Sextons say the owner pledged to deliver a more robust water mitigation plan within a few days of the incident, but it’s been a month since that meeting and no plan has emerged. We reached out to the owner over the weekend, but have not heard back.

Meanwhile, neighbors have stepped up efforts in recent weeks to get the town involved.

They say they have reached out to the Building Department, Engineering Division. Natural Resources Commission and Planning Board. At the Aug. 6 Planning Board meeting, Sexton and McLean Street neighbor Rob Ruffin aired their concerns during the citizen speak segment (starts just before the 7-minute mark of this Wellesley Public Media recording).

The way Sexton sees it, rehabbing homes is a good thing for neighborhoods. But in this case, he said at the Planning Board meeting, the property owner has been “shrewd” about “going right up to the line” in making sure not to trigger any special permits and get the town officially involved in inspecting its building practices.

After listing the steps that neighbors had already taken to try to resolve the issue, Sexton told officials at the Planning Board meeting: “I guess we’re just coming to ask for help.” 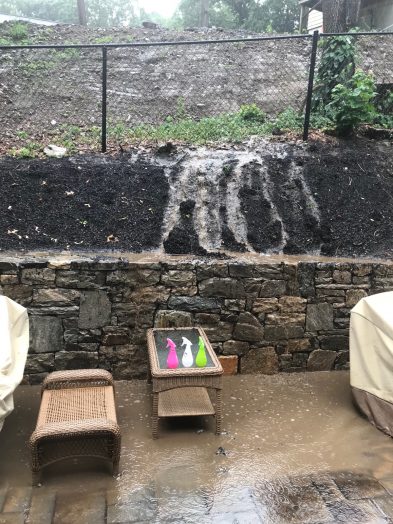 But Planning Director Michael Zehner didn’t have especially good news for the Sextons on that front: “I hate to tell you but…it may be a civil matter,” said Zehner, who noted the board has heard similar sorts of complaints in the past. In a follow-up email to us, Zehner wrote: “No doubt they have legitimate concerns, but absent applicable regulations on stormwater, grading, and erosion and sedimentation control measures during construction, the Town has no recourse.”

The meeting did, however, prompt Planning Chair Catherine Johnson to visit the property this past weekend just before I did. During the Planning Board meeting, Johnson said the board’s only recourse would be to put in place new regulations, but any new bylaws would require Town Meeting approval and that wouldn’t take place in time to address this specific situation.

“I certainly appreciate your concern,” Johnson said during the Planning Board meeting. “In my heart of hearts… every single house that’s built in Wellesley would in some way, shape or form be permitted. That could be considered onerous for some people, but it ends up creating more of an omnibus for the town. That’s the way it was built.”

So while you might think based on some of the discussion around newer Wellesley bylaws such as those related to large house reviews and teardown delays that you basically need a permit to blow your nose in town, it turns out that that’s really not the case.

Wellesley doesn’t appear to formally keep track of  complaints like those of these neighbors. But if the Sextons’ and Ruffins’ concerns resonate, it’s possible that others coming forward to town officials en masse could spark action on new bylaws, such as a hillside protection rule, that could help others down the road.