We’ve had several inquiries lately about what’s going with the fencing and teardowns at Delanson Circle off of Linden Street across from the now mostly empty Wellesley Square commuter rail lot. It’s not surprising that the proposed condo project for that property might have faded from much of the community’s memory given that it’s been in the works for so long and lately out of the spotlight.

That’s the future site of Wellesley Crossing, a condo development that has been slogging through the town’s approval process since 2017, originally as a 40B proposal that would have given the developer a break on zoning rules in exchange for including a certain percentage of affordable units. It was among a spate of 40B proposals that developers a few years back foisted upon the town, which has since scrambled to address its lack of affordable housing stock per state standards, in part by developing a housing production plan and in part by making progress on a 40R project at Wellesley Office Park. There’s a movement in town now to be more proactive about making housing in Wellesley more affordable and diverse, such as through the Building a Better Wellesley initiative.

We realized this week that we hadn’t written much since mid-2019 about the Delanson project, or another one dubbed Wellesley Park from the same developer at 148 Weston Road and two adjacent properties. At that time we reported on the projects being scaled way down following meetings between the developer, neighbors, and town officials, and Town Meeting blessed the change in May of that year. Per usual, the developer rode into town aiming high—95 units on Delanson—and settling for less (35), and 55 units across five stories on Weston Road, and settling for 28 units across three stories and a separate 2-family building with affordable units. 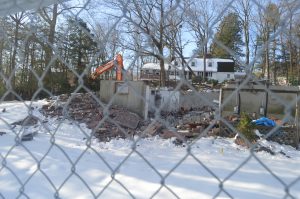 In our defense, it’s been tough to keep track of these projects. Not that those developing the projects haven’t been visible—they’ve subjected themselves to a seemingly endless gauntlet of meetings with the Planning Board, Design Review Board, Board of Selectmen, Zoning Board of Appeals, and we must be missing others, over the past few years. It’s not uncommon to see the development team, at the end of the longer stages, jokingly bid a “we’ll miss seeing you on Zoom” farewell to board members (as seen just before the 1-hour 30-minute mark of this Nov. 2 Planning Board meeting recorded by Wellesley Media).

But  we’re not gluttons for the punishment of sitting through many of those often hours-long affairs. There’s no big payday coming for us at the end of this process as there presumably must still be for the condo project teams.

Developer Victor Sheen and team grinded out a 2-hour meeting with the Zoning Board of Appeals on the Weston Road project on Dec. 8 fresh off a stint at the Design Review Board on Dec. 2.  Sheen (who we did reach out to by email for an update) sounded a bit worn out, no doubt from repeating his project development narrative for the umpteenth time.

But  the developer still was making fresh appeals for assorted relief, this time related to building height (three stories above a garage) and a retaining wall. Sheen mentioned numerous times how much their plans had already been reviewed by others in town, and how what they are asking for is a matter of fitting in with the topography of the location, which is sandwiched between often busy Weston Road and quieter open space used for trails and gardens.

Not surprisingly, the hearing is being continued into early January for more action-packed discussion, with plans to focus on the construction management plan.

Both projects have passed through two major stages with the town. These are the residential incentive overlay (RIO) and project of significant impact (PSI) approval processes, the latter of which entails everything from town infrastructure to traffic concerns, according to Planning Director Don McCauley, who recently gave us a quick status report on the projects.

While the Weston Road project is already in the process of jumping the last big hurdle—site plan approval—at the ZBA,  the Delanson project was waiting for an obligatory appeals period to end before it headed there. Once the projects get through the ZBA it shouldn’t be long until construction is in sight.

That would make for big changes on and around Linden Street, where property manager Federal Reality also has a sizeable Linden Square upgrade in mind that would get underway in 2021. One break for residents concerned about the construction, increased traffic and other threats to the character of their neighborhood is that all appears quiet on plans to redevelop the parking lots at the train station, which have largely gone unused since the pandemic emerged except for a series of drive-in movies.