The Wellesley Select Board has come out with a statement to reaffirm its anti-bias and anti-racism commitment in response to reported incidents that have occurred in town.

Recent events have brought about something of a reckoning to a town that maintains through its highest government office, the Select Board, that it opposes “…any expression of hate, prejudice, intolerance, or discrimination toward any individual or group.”

Last week Wellesley Middle School administration informed the community that a word was written in a coat of dirt on a METCO bus window that contradicted the school’s values of inclusivity and safety for all.

Also last week a group of about 100 parents, students, and others gathered in front of the high school in a show of anti-bullying support for a Wellesley High School student attacked by peers over the summer near and on school property.

In addition, a parent group in a federal suit accused Wellesley schools and officials of racial segregation.

Wellesley is a town that highly values diversity, dignity and respect for all individuals. As the Chief Executive of the town, the Select Board recognizes its responsibility to make the following declarations:

The Board opposes unequivocally any expression of hate, prejudice, intolerance, or discrimination toward any individual or group;

The Board commits to engaging the Town on race, equity and inclusion through broad and collaborative public engagement; and

The Board denounces any form of racism, discrimination or intolerance as a threat to the safety and well-being of the public. We call upon the entire Wellesley community to welcome every resident, visitor, employee and resident student in the Town.

Initiatives aimed at building an equitable and inclusive community

The Wellesley Civil Discourse Initiative—working to create open and inclusive public conversations that lead to greater understanding and stronger community connections, and to lay the groundwork for broader public engagement in decision-making.

The Wellesley Freedom Team—formed to address incidents of hate and bias in a way that people might be more comfortable reporting them. The program is open to residents, visitors, employees, and employers in town. The group encourages those who experience threats, harassment, or violence related to race, color, sex, gender, sexual orientation, ethnicity, national origin, religion, disability, or class to call its hotline at (339) 216-0124 or send email to WellesleyFreedomTeam@gmail.com (9-1-1 should be called for emergencies). When a message is left on the hotline or via email, individuals should expect a response within 12 hours.

The Wellesley Diversity, Equity, and Inclusion Initiative— a call was put out over the summer for 25 volunteers to chart a path for inclusion and equity in Wellesley and a plan to put such a vision into action. This task force, comprised of Town officials, thought leaders, faith leaders, individuals with marginalized identities, and others will be convening in the coming weeks. Initials discussions will center on how to identify and develop a framework supporting racial equity and establishing community guiding principles and intentional practices for anti-bias, nondiscriminatory and anti-racist attitudes, and behaviors.

“The Wellesley Board of Selectmen reaffirms its position that Wellesley is a town that highly values diversity, dignity and respect for all individuals. Wellesley strives to be a welcoming town; therefore, the Board opposes expressions of hate, intolerance and discrimination. The Board encourages the entire Wellesley community to continue to exhibit caring and supportive actions in support of our diversity.” 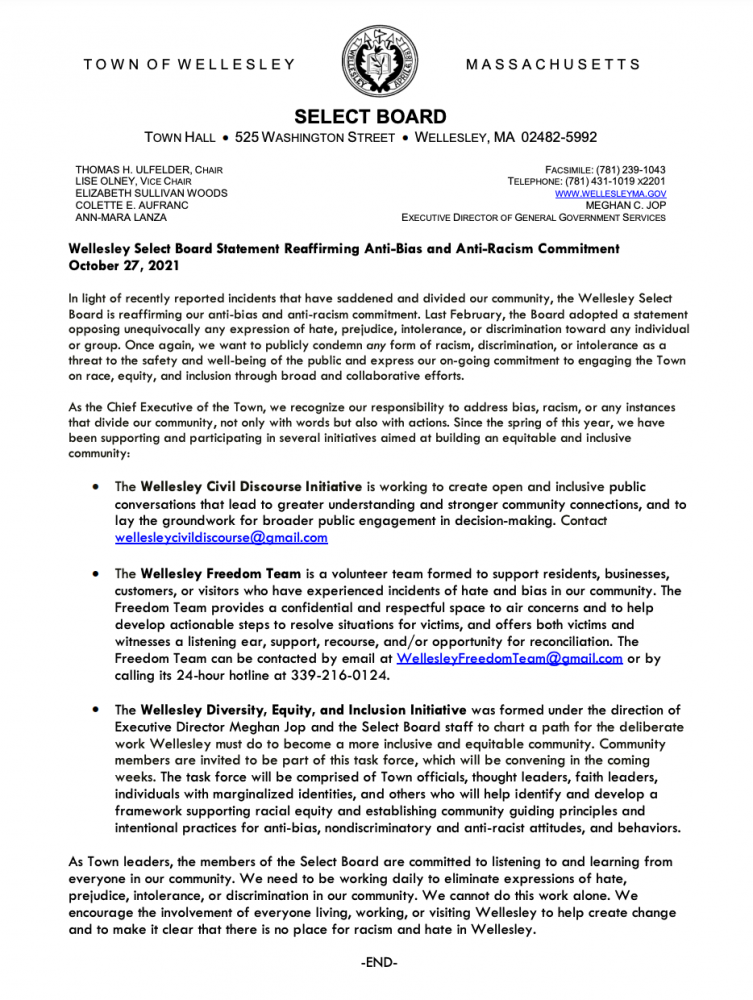