Pregame Rituals: Keep to myself and listen to my pump-up playlist

Goal for the Season: I want to make states 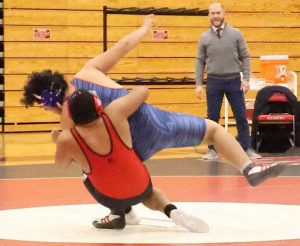 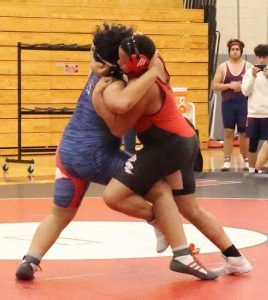 Darren Jimenez is a versatile Wellesley High School athlete. In the fall, he starts as an inside linebacker for the football team, and in the winter, he is one off the wrestling team’s top performers. Coming off of a victory over Milton, where Jimenez remained undefeated (4-0), the Raiders’ wrestling squad (4-7) hopes to continue its winning streak for a chance to compete at states.

Jimenez has worked to become a vital piece to this Raiders team, but he almost chose a different path.

During his sophomore football season, Jimenez played on the D-Line, where he got to know Chris Sywetz, an assistant coach. As the season closed, Jimenez went to see Coach Sywetz, curious about an off-season workout plan. When Sywetz first recommended wrestling, Jimenez was skeptical, fearing he could hurt himself. After several attempts, Sywetz convinced Jimenez to try wrestling that winter.

Coach Sywetz himself was a highly decorated wrestler. He originally got into wrestling for the same reasons as Jimenez: He wanted to stay in shape for football. Having wrestled in high school, Sywetz saw how much it helped him on the football field. After playing football at Bryant University, Sywetz joined the Framingham High wrestling staff as an assistant in 2016, where he stayed until he landed the head coaching job at Wellesley in 2021.

Given his experience, Sywetz can judge what makes a successful wrestler. Jimenez has impressed Sywetz:  “I selected Darren Jimenez for Athlete of the Week because he has that ‘it’ factor coaches look for in athletes.”

The “it” factor refers to intangible qualities that include work ethic, commitment, focus, and leadership. It is essential for an athlete to be internally motivated to possess the “it” factor. They must be able to do extra workouts on their own and not care if anyone finds out how much time they are devoting to getting better. They must be able to play harder than everyone when things get tough. Jimenez’s natural instincts, innate abilities, and constant desire for success have helped him excel in a sport that he hasn’t participated in for very long.

Jimenez has already seen progress, according to Sywetz, “After coming out last year in hopes of becoming a better football player, he’s transformed his body while shaving off the baby fat and packing on the muscle.”

Sywetz further expounded on Jimenez’s commitment: “He is also a fierce competitor.”

He has the unique ability to flip a switch, going from calm to locked in. Jimenez’s acute focus allows him to elevate his performance on the mat while also inspiring his teammates to work harder.

Praising Jimenez’s leadership, Sywetz said, “He’s the glue to the team.” Although only a junior, so many look up to him on the mat and also in how he interacts with others. “As a kind kid, he always tries to bring people together; he never wants a rub between teammates.”

Sywetz also lauded how Jimenez has helped to rebuild the Wellesley wrestling team. “Darren has had numerous moments of being a great leader at the high school, but none more special than what he’s doing with the wrestling program. As he helps Wellesley build back their struggling wrestling program, he’s creating a team where hard work, focus, and respect are the core values.”

Finally, Sywetz noted how Jimenez’s grit has helped him dominate this year. He mentioned how countless times Jimenez rallied during tough matches to help seal the victory for Wellesley. Although Jimenez had many memorable moments, Sywetz’s favorite came during Jimenez’s match against Milton. “He was going back and forth until Darren went into beast mode and dominated his opponent. Pinning the other athlete and following it with a grand gesture of emotion, flexing his muscles and letting out a big scream. That was when I knew Darren would be a great wrestler.”

Proud of his rise to become one of the best wrestlers in the MIAA Bay State Conference, Jimeniz said:, “I hope that I can continue to win my matches, not only for my record but most importantly, so that our team can continue to emerge victorious.”

Jimenez expressed gratitude for his peers. He said he would not have achieved his success to date if it weren’t for his “teammates and coaches who push me to get better every day. Even when I feel like I can’t give it anymore, they instill belief in me that I can conquer anything in my way.”