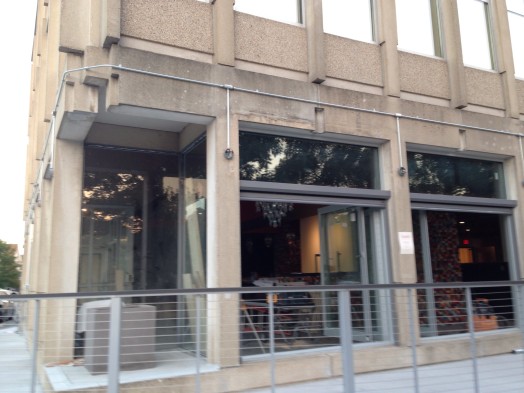 Bocado Tapas Bar‘s grand opening date in Wellesley hasn’t been set yet, but expect it to be around the end of September at 45 Church St., in the old Paper Source space.

Workers have been sprucing up the inside and outside of the EDENS property, where there will be seating for 100+ patrons to sample the restaurant’s authentic Spanish cuisine. This will be Worcester-based Niche Hospitality Group’s third Bocado restaurant, with the Providence one opening in June and the original launching in Worcester back in 2006.

While you can order individual items off the tapas menu, Bocado promotes table sharing options that include meats/cheeses, entrees and desserts, and cost $75 per 2 people or $135 for 4 people (at least these are the prices in Worcester and Providence…). Pitchers of Sangria are also encouraged.

There will be a private function room as well as live Flamenco performances.

When we spoke to owner Mike Covino back in January about Bocado coming to town he said that he and his business partners looked at Wellesley as a place that “already supports destination dining for restaurants Blue Ginger and Alta Strada,” and therefore seemed like a good fit for the type of dining experience Bocado offers.

Bocado is part of a restaurant resurgence in town led by The Local, which opened in November and Juniper, which opened this summer in Wellesley Square (see our review).

If you’re interested in working at Bocado, they’re having a job fair this Saturday, Sept. 6 at their 45 Church St., location from 9:30am-1pm, and bartenders, cooks, hosts and servers are among the positions up for grabs.