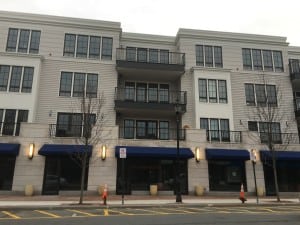 Fancy clothes retailer David Chase gushed in a November 2014 press release about bringing two of his eponymous shops to town, possibly as soon as Spring of 2015, as part of the Belclare Wellesley condo/retail complex on Washington and Grove streets where the Wellesley Inn used to stand.

“It is exciting to bring our specialty collections for men and women to Wellesley’s sophisticated and discerning clients… We are so grateful for the warm welcome we have received as we join this dynamic community,” the statement read.

But here we are on the verge of Spring 2016 and the David Chase shops have yet to make their arrival. We assume a follow-up press release would have been issued, in the spirit of transparency, if a change of plans had been made by the business, but we’ve not come across anything like that. We hit up the David Chase business by email and on their quiet Facebook page, but have not received any response. The PR firm that issued the original release has also not replied to an inquiry.

So for now you’ll need to just make do with those rags you’re wearing, or trek to Palm Beach or Nantucket if you want to buy any of David Chase’s “hand-selected and curated European collections of men’s and women’s fashions and accessories.”

Belclare has pretty much filled up its ritzy condos, which lured those who could afford a $1.4M starting price. But at least publicly, things remain fairly quiet as far as retail space being occupied at Belclare, which is displaying a big sign on the property to drum up interest (rental rates are listed simply as “negotiable” on one real estate site). Many restauranteurs have reportedly kicked the tires, according to the word on the street. And as we reported in September, Thirst Juice announced plans to bring its healthy food to the Wellesley Belclare complex as soon as late last year. But a check-in last month with one of the owners found that it’s still unclear when the business, which already has a popular downtown Boston spot, might get up and running  in Wellesley.