How many Wellesley blondes does it take to win a spelling bee? Three, as it turns out, and if you’re looking to buy or sell a home in town, they can make that happen, too. Congratulations to Coldwell Banker Residential Brokerage team members Elke Cardella, Moira Lown, and Sheila Olson, who correctly spelled unguligrade to take home the trophy. The word describes the gait of ungulates (e.g. horses and cows), in which only the tips of the digits (i.e. the hooves) are on the ground and the rest of the foot is off the ground (of course).

Kudos also to the Wellesley Education Foundation, which welcomed 55 teams to its 27th annual Spelling Bee and raised $56,500. WEF has quite an impact in town, awarding $281,578 to WPS educators in 2015 -2016. Nearly $1.2 million has been awarded in grants and assistance to WPS educators in the last ten years.

Here are some of the words the teams faced: bradyseism, anaudia, ophicleide, stromuhr, pityriasis, aileron, and exsiccosis. And that was just in the first seven rounds. The finalists — Wellesley School Committee — Word Nerds; Coldwell Banker Residential Brokerage; WHS Senior Class Senior Officers; Wellesley United Soccer Club; Upham Frizz-Bees; WHS PTSO — UnBEEtables; and Wellesley College — made it to the championship round. From there, they were asked to spell feuilleton, which wasn’t so bad for these stalwarts. But it was unguligrade that stumped all but Coldwell Banker.

As always, the Bee was a fun community event. The Law Offices of David Himmelberger studied up intensely, and yet fell short once again. Himmelberger took some ribbing from Master of Ceremonies and former WCVB Channel 5 sports reporter Mike Dowling for being a perennial presence. “What is this for you, 27 years?” he asked. Say what you will about Himmelberger’s long stretch of spelling efforts with no trophy to show for it all, but don’t rule him out for next year. The man is competitive. I know because we are on the same usher team at church, and although statistics aren’t officially kept on such matters, there always seems to be much more in his collection plate than those of the rest of the ushers.

Dowling always tosses a few easy practice words out there, just to calm the nerves of the spellers. This year he themed it to politics, but gave up pretty quickly after lobbing “election” and “marijuana”, claiming to have run out of election words. Really, Mike? Because I haven’t run out of such words at all. But he was the MC, and likely had his pulse on the crowd, which seemed rather lethargic. Something about staying up half the night on Tuesday, I’m given to understand. It’s a strange Bee when Dowling doesn’t once have to scold the crowd to quiet down, but such was the subdued nature of the recently politically subjugated.

Dowling also gave a shout-out to the Wellesley Townsman team who he said “…always does a great job bringing us the news every week.”

We agree, and will miss able reporter Jordan Mayblum, a long-time fixture on the front page of the Townsman, and the page after that, and the page after that. After three and a half years of attending School Committee meetings, sporting events, and ceremonies of all types he is moving on. Good luck, Jordan, and please like The Swellesley Report on Facebook and follow us on Twitter. We have a sweet Insta as well, it’s sort of got a cult following.

Wellesley High School principal Jamie Chisum worked the gong, as usual, warning teams when there were only five seconds left to complete the spelling of their given word. After the year he’s had so far, I encouraged him to just take the gong home because it looked like a really good stress reliever. I won’t go into the details except to say that Chisum has seen more as this first term of school comes to a close than he typically does in an entire year. Hang in there, Principal Chisum, and thanks for all you’ve been doing.

Congratulations to the winning team and also to all the hardworking volunteers, especially co-chairs Lisa Collins and Victoria Ostler,  who made the event run smoothly. You guys know how to put on a fun event, how to move it along at a brisk pace, and how to make some serious money for Wellesley public schools while you’re at it.

Well, that’s my report from this year’s Spelling Bee. I remain ever yours, 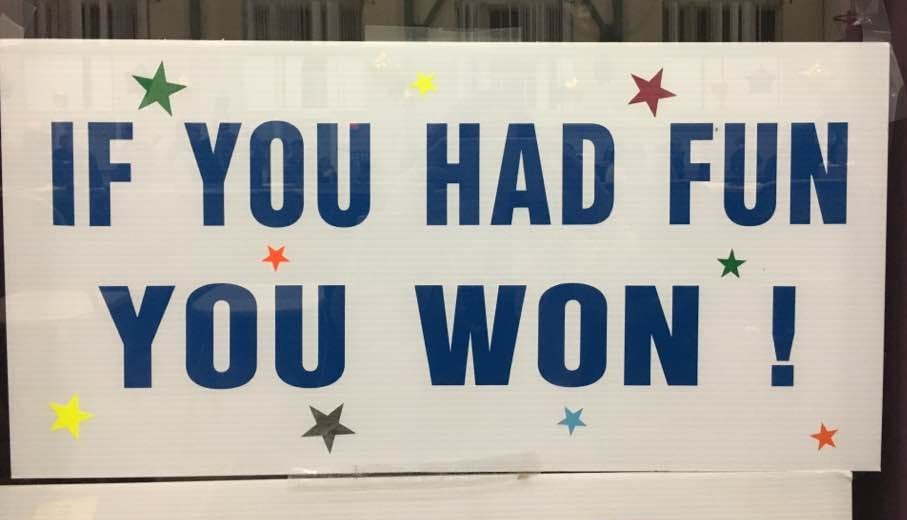