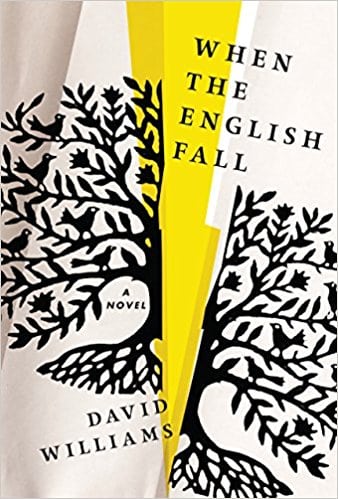 There are so many ways that the English fall in David Williams’ debut novel When the English Fall. After a solar storm takes the entire world off the power grid, their planes fall out of the sky. Their communications systems grind to a halt. There is no longer any such thing as banking, television, or attending school. From there, it’s not long before decency falls and gangs go on the attack, desperate for the food they know the Amish have stored in their well-stocked larders.

Set in Lancaster County, Ohio the self-sufficiency and industriousness of the Amish is juxtaposed with the grasshopper ways of the “English” (that’s you and me) who live lives looking “down into their rectangles of light,” living “as if “today is the only day.” Soon the grocery stores of the English empty out and they finish up the last few cans of spaghettiOs they found rolling around in their basements. Once that happens, panic sets in and even the Army and the National Guard can’t keep much more than a veneer of order.

Jacob, the novel’s narrator, and his community struggle to live their faith as they are put through a time of trial and testing. The Amish are largely considered by their neighbors to be something like angels in their midst. When a horrific In Cold Blood-like massacre occurs, the neighbors take up arms and take care of business. How long, wonders Jacob in his matter-of-fact, unflowery journal, can his community, committed to non-violence, live under the protection of “Pharaoh’s army”?

The unsettling story is revealed to us through Jacob’s eyes as he records it in his journal, his sentences and cadence as plain and straightforward as his clothes. He and his small family consisting of his wife Hannah and their two children — Jacob, sturdy, hardworking, and on the cusp of manhood, and Sadie, who suffers from seizures and has the “gift” of prophecy — have always bumped up against the English. Amish and English farms abut each other, and Jacob has frequent business dealings with Mike, a divorced dad of two with a girlfriend and a fondness for conservative talk radio, both of which rile him up to no end. Typical English. But Jacob builds the furniture and cabinetry, and Mike handles all the outside world dealings, and it pays the bills. Even the Amish have to pay property taxes and buggy insurance.

Through Jacob’s journals we see a deeply religious man and are given the great gift of seeing how such a man walks and talks and how he rails against and accepts his own flaws. Yes, Jacob “judges” the English, but his judgement takes on more of a concerned rather than a condemnatory tone. To him, the English are a people for whom “contentment seems out of…reach” as they chase lives that seem to him to be “so very hard.”

This powerful book is in a way one of the oddest in the apocalyptic genre. It hardly even fits in the category. With books such as Cormac McCarthy’s The Road, or Susan Pfeffer’s young-adult series Life as We Knew It we see how much the main characters have had to change and how they mourn their former lives as they learn to endure and simply survive.

With When the English Fall, we see how little the main characters change, even as the world around them is in utter turmoil. That the English world has ended would be incidental to the Amish, if only the English had disappeared right along with the electricity. Under such a “poof!” scenario, the Amish could have gotten along just fine. It’s the hungry, panic-stricken, desperate outsiders who are ruining it for them. Because of the terror that’s taken hold of the rest of the world, the Amish have good reason to be  scared, yet they do not devolve into terrified. They simply don’t have to dig very deep to figure out how they should proceed, because their faith, as an ever-present part of the bedrock of their lives, informs them.

That modern conveniences no longer exist doesn’t affect the Amish directly at all. As it turns out, however, those conveniences were might handy for keeping the English busy, occupied and out of the business of their gentle neighbors. It’s sort of a funny way of thinking about how the Amish “use” things like radio, television, cars, and smartphones. These toys of modern living are not things that they have much use for. After reading this book, all the doo-dads I use every day and will never willingly give up seem, in a certain light, more like trinkets to hand off to children who need to be entertained while the adults go about the important business of living. And we all know how children react when you snatch their trinkets away.