Former First Lady Barbara Bush, who died earlier this spring at the age of 92, left her mark on Wellesley in 1990 when she was chosen as Wellesley College’s commencement speaker. Now her words at what has been called by NPR as one of the “Best Commencement Speeches Ever” will live on in a commemorative 64-page book to be published on June 12. Titled Your Own True Colors: Timeless Wisdom from America’s Grandmother Scribner publishing house said in a press release that it “…will impart the advice she offered to Wellesley graduates that day – words that are as wise and relevant to the class of 2018 as they were to the class of 1990.”

Who could have seen this coming in 1990? Back then, her choice as the speaker sparked a student protest focused on Mrs. Bush not representing the sort of career woman that the protesters aspired to become. Wellesley grads also spoke out, such as in this Orlando Sentinel column (“Wellesley grad: Barbara Bush has no place at Commencement”).

But at the end of the day, America’s Grandmother won over the crowd. In her speech, Mrs. Bush urged students to think beyond themselves. “At the end of your life, you will never regret not having passed one more test, not winning one more verdict or not closing one more deal. You will regret time not spent with a husband, a child, a friend or a parent,” she said, before turning to the importance of diversity by learning about and respecting …”difference, to cherish our own identity. . . and to accept unconditionally the same in all others.” She encouraged the graduates “to get involved in some of the big ideals of your time,” to seek joy in life, and to “cherish your human connection: your relationships with friends and family.” Most of all, she told them to search for their own true colors. As she said, “In the world that awaits you beyond the shores of Lake Waban, no one can say what your true colors will be.” Here’s her speech in its entirety.

Mrs. Bush was followed at the podium by Raisa Gorbachev, the late wife of former Soviet leader Mikhail Gorbachev.

Their tag-team effort has been memorialized on the Wellesley College campus via this plaque seen on an out-of-the-way staircase. 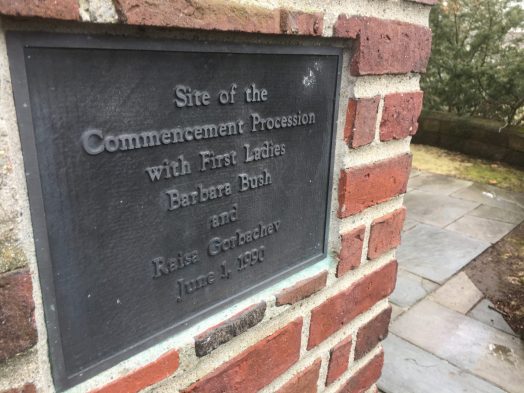