In this year’s 40th annual Pan-Mass Challenge (PMC), 144 of the 6,700 riders are Wellesley residents. The PMC takes place on August 3-4, when riders will cycle between 25 and 192 miles in an effort to raise money for the Dana-Farber Cancer Institute. The riders, coming from 43 states and 12 countries, will choose one of 12 routes.

In the 2019 press release, founder and executive director of the PMC, Billy Starr, credited the “unwavering passion and commitment of [the] riders, volunteers, donors, and sponsors” for the PMC’s “tangible impact on advancements in cancer research and treatment since 1980”.

Last year the PMC raised $56 million, thereby granting Dana-Farber with the largest gift ever from any organization. This year, the PMC hopes to raise $60 million and break its own record.

Among this year’s 144 Wellesley riders, Ken Jones will be cycling in his 16th consecutive PMC. Jones rides the PMC with Team Flames, which stands for Fast Legs And Minds Ends Suffering. When Jones joined the team there were only 10 members, but this year there are as many as 90 members. 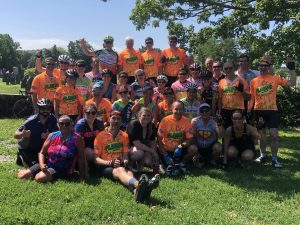 In addition to Jones’ fundraising and riding efforts, his wife Cathi Jones, a registered nurse, volunteers at the medical tent each year. In Ken’s words, Cathi has been involved and been making a difference in cancer care for her entire career. All four of the Jones children have also been involved in fundraising for the cause through Kid’s Rides, a shorter riding route, and internships with the PMC. This year their son, Mack Jones (23), will ride alongside Ken on their two-day route. 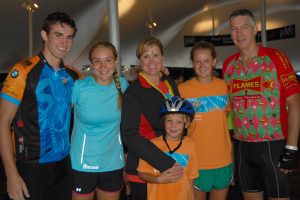 Ken loves riding and fundraising with the PMC because of its community and cause. He also has personal connections, as his mother-in-law worked at Dana-Farber, and unfortunately, Ken’s own mother has started chemotherapy. “Luckily, Dana-Farber has been really instrumental in the treatment and we know she is going to be fine.” Ken continues, “There is a fundraising and patient side of this organization. This year I’ve experienced both.” His personal connection to both sides of the PMC has only made his admiration and love for the event grow stronger.

You can donate to Ken and his ride using the link below. Good luck, Jones family!

Another Wellesley rider, Bonni DiMatteo, will be taking part in her 4th PMC, which she calls “the greatest joy of her life.” DiMatteo says that the PMC is like an extended family, made up of both riders and survivors. DiMatteo rides with Team Zakim and will be cycling alongside her niece. 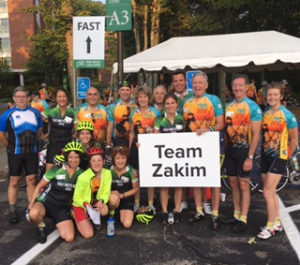 DiMatteo is what the PMC calls a “heavy-hitter”, a person who raises over $8,000. She says that even so, fundraising is more difficult than the ride itself. You can donate to support Bonni DiMatteo using the link below. Best of  luck, Bonni! 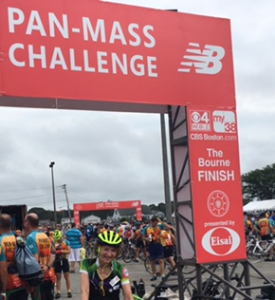 This year, sadly, many Wellesley residents ride in memory of Andy Kessler, who passed away from throat cancer in September of last year. Kessler first joined the PMC community in 2004 when he rode for Team Hannah’s Bandanas. This team was also created that year and was formed for Hannah Packman, Jeff and Karen Packman’s daughter, who was treated at the Dana-Farber Cancer Institute for acute lymphoblastic leukemia from 2002 until 2004.

“We were very close with Jeff [and] Karen Packman,” Betsy Kessler explains, “Andy had really never ridden a road bike before nor did he really ever exercise regularly, but he decided right away to join the team and got to riding. He loved it and never looked back.” 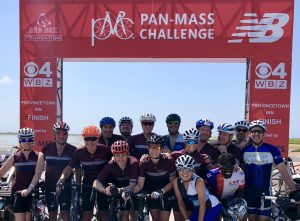 Betsy herself is participating in this year’s PMC as a “ghost rider”. She knew how much the PMC meant to Andy and wanted to find a special way to raise money in his honor. Betsy’s goal was huge at “$56,000 in recognition of Andy’s 56 years on this earth.” Impressively, she has already surpassed her goal.

For Betsy, it is difficult to put into words what the PMC community means to her, but she is extremely grateful for all the support she has received through it.

Hannah Packman’s father Jeff will ride his 16th PMC this year in honor of his friend, Andy. Though their team has grown this year to honor Andy, having 25 members classifies them a small team. Yet, in the last 15 years, Team Hannah’s Bandanas has raised almost $2.6 million and as Packman explains proudly, “on a per rider fundraising basis we consistently rank among the top teams.” 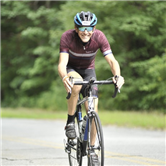 Team Hannah’s Bandanas has dedicated this year’s team jersey in honor of Andy. Good luck to the team, and use the link provided to donate.

Here’s the list of Wellesley riders supplied to us by PMC (if you should be on the list and aren’t on here, just let us know at

theswellesleyreport@gmail.com and we can add you):