Running and gasping up hilly Pond Road a few times a week, I rarely notice the houses as I pass under the tree canopy and by stone walls, security gates and Lake Waban. That’s part of what’s special about this bumpy old path, 1 of just 7 officially designated scenic roads in Wellesley. It is, as one Pond Road homeowner said at a recent public meeting, kind of like.going through a “magical forest.”

That dynamic could be changing. A Boston developer is looking to build 2 homes on property at the top of the road, near Rte. 135, that would be set closer to the road than most of the estates along this stretch. Despite the development team’s assertions that plantings will be added and efforts will be made to retain a tree buffer between the new homes, the existing ones and the street, it seems clear that the look and feel of upper Pond Road would change.

The owner of the 10,000-plus sq. ft. home at 200 Pond Rd., in Natick is selling lots at 194 and 196 Pond Rd., in Wellesley to the developer, who has been making the rounds with his team through Wellesley board meetings since fall. They’ve hit the Design Review Board (pretty easy) and Planning Board (not so easy), and next will star at a public scenic road-focused meeting on March 16 featuring the Planning Board, Natural Resources Commission and Tree Warden.

The developer, recognizing that Wellesley ain’t SOBO, has hired attorney Larry Shind, who knows the ropes in town as a former Board of Selectmen and Advisory Committee member. The lawyer has done his best to position the proposed homes as not being out of character, noting that the topology of the property allows the houses “to be nestled into the hillside.” He has also cited existing homes that are indeed visible from the road, especially at the lower end and during winter, and that are larger than the houses pitched for 194 and 196 Pond Rd. 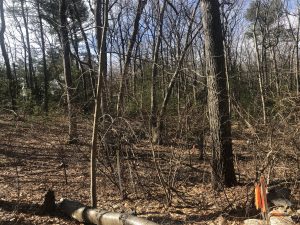 As is typical of such proposals, the developer went for broke with an initial plan to cram lots of house onto each property, as presented at a Dec. 2 Planning Board meeting. Planning Director Don McCauley, who acknowledges the challenges of weighing the right to build vs. maintaining the character of an area, ticked off a long list of concerns about the project. These related to scale, landscape preservation and other issues, such as the logistics of construction on so narrow a road, where no on-street parking is allowed.

The developer has since scaled things back in light of town official and neighbor feedback during this Large House Review process. This “substantially revised proposal,” as attorney Shind described it at a Feb. 3 Planning Board meeting, included moving away from making the 2 proposed homes look so similar to each other, shrinking their square footage from 12,500 to 9,000 and 11,500 to 9,400, pushing the houses back from the road to a minimum of 65 feet (from 40 feet), and planting dozens of new trees. He emphasized that the stone wall and trees along the road would remain untouched.

(Time tracker: While I’ve never actually stepped foot in a Pond Road home, I go up and down the road often. For this post, I’ve plodded through some 5 hours of meeting recordings on Wellesley Public Media, and I’ll tell you, nothing gets my blood pumping like some good TLAG and dark sky lighting talk. I’ve largely written this post based on the videos, minutes from the meetings and other background.)

Neighbors and town officials still have their concerns, which range from the visibility of the proposed homes from the road to significant tree removal to sewer and lighting issues. The aesthetic impact of the side-by-side projects is the main concern on this road, which mainly includes Wellesley College property on the east side.

“I hope you truly understand how people in this town feel about…Pond Road,” said Planning Board member Kathleen Woodward at the Feb. 3 meeting, where she expressed special disappointment over landscaping plans. “It’s very precious to this town, and it deeply disturbs a lot of people that someone wants to come in, tear down a lot of trees and place houses close the road that don’t fit with any house on that street and change the look of a really beloved road in our town.” 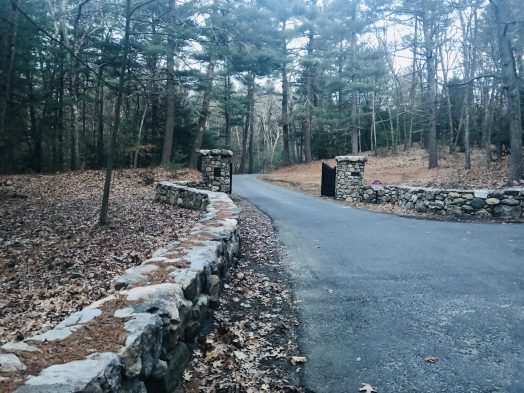 Neighbor David Howe at the Feb. 3 meeting publicly thanked developer Joe Hassell for reaching out to him and meeting, but still has issues with the preservation of the landscape, scale of the buildings and the open space implications of this project. “If you look at Pond Road…it is maybe not a unique road in town, but it’s close to that. And particularly at this end of Pond Road, it is sort of a canopied entrance into an older forest,” he said. “While I appreciate the changes that have been made, they don’t really change to me the impact of what it’s going to be like to drive through the beginning of Pond Road and see 2 white houses still quite close to the road.”

Also among those speaking up have been members of the Hunnewell family, which is synonymous with Pond Road to me. Frank Hunnewell, who lives at the lower end of Pond Road with his wife, also said he appreciates the willingness of the project leaders to listen to comments and make changes. But he said he still has concerns about open space usage and nearness to the road. “Given the environmental, the scenic and the historic nature of the site, it would be my hope that the project actually would have to reach a higher bar than if it were in a part of town where these buildings are more customary.”

The public will get to hear more at the scenic road public hearing on March 16 at Town Hall. Given that the road is at the edge of both Wellesley and Natick, and that only a handful of homes have Pond Road addresses, it remains to be seen whether this matter will gain attention across Wellesley from more than the Hunnewells, their neighbors, and town officials. We’ve seen controversies in the past in Wellesley involving development along scenic roads, including on Brookside Road, which includes Wellesley Country Club among its neighbors.

The 2 new homes will have little impact on things like traffic and school population, issues that have inspired public action involving recent 40B projects in more central parts of town. While the cutting down of trees will be apparent on Pond Road, the changes won’t be as in-your-face to most of Wellesley as say the Great Plains Avenue 40B project, which is passed by so many on their way to the Wellesley dump.

But if you value what Pond Road means to Wellesley and want to learn more, the scenic road hearing on March 16 should be worth your while.