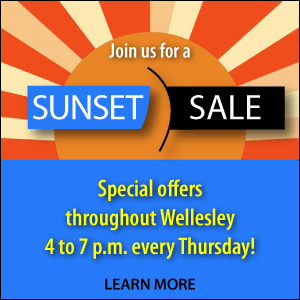 YogaSix was among a few businesses looking to open in Wellesley this year, only to have their plans upended by the pandemic. Unfortunately, for this local franchise, its doors won’t be opening in Linden Square after all. A Swellesley reader had inquired about the status, having signed up as an early member in March, only to have her membership canceled and payment returned in May.

“Unfortunately, due to the current circumstances, we are no longer able to move forward with the YogaSix location in Wellesley. We were excited to join the community and had strong feedback from early members. But ultimately, we were not able to weather the financial storm,” writes Jed Sturman, the franchise owner.

The Cottage, Door No. 7 to return on August 7th

The Cottage and Door No. 7 restaurants in Linden Square, owned by restaurant power couple Laura Wolfe (who grew up in Wellesley)  and her husband John Wolfe, plan to reopen their doors on Aug. 7 for indoor and outdoor dining as well as takeout. Both establishments have been closed since mid-March due to the COVID-19 pandemic.

A post on the Door No. 7 Facebook page says, “We’re committed to exceeding state and local standards for creating a safe — yet comfortable — dining experience.”

Goddard School says goodbye before it even gets here

Late last year The Goddard School entered into a preliminary lease agreement for the rental of the St. Paul School building at 502 Washington St. The arrangement with the early education provider, and the anticipated income the agreement would generate, was good news for the church, and the idea was popular with parishioners.

However, the expected $3.5 million in renovations to the school building that The Goddard School had planned proved to be the undoing of the deal. Jackie Welham, Director of Finance and Operations for the St. John – St. Paul Collaborative said in response to our recent email inquiry, “The Goddard School was unable to secure the necessary financing to go forward with their planned project. The St. Paul School building is once again available for lease.”

The school building most recently operated as St. Paul School. The Catholic school closed in 2015 after 60 years of educating K – 8th grade students.