Wellesley Public Schools Supt. David Lussier, who calls the evolving viral testing program a core part of the school reopening plan, gave an update on the effort during this week’s School Committee meeting. Note that this is a topic nearly impossible to report on, as details change daily, hourly, etc.

The plan now focuses on baseline testing for all students and staff to start the school year, then ongoing surveillance testing of staff (perhaps a third of the staff per week, to give an early warning about trends). The school system will defer to the town’s Health Department, which partners with Newton-Wellesley Hospital, on testing residents (and possibly WPS staff) with COVID-19 symptoms.

A request for proposals (RFP) to operate the testing program has been issued, and responses have been received that give the school system an idea of how much this could all cost, as seen in the slide presented by Dr. Lussier at the School Committee meeting. Some expenses will be covered through grants or other programs (including one called Immune Observatory that will cover baseline saliva testing for WPS staff), though budgeting also includes spending by the school system with support from the Wellesley Education Foundation, which has committed funds and is raising more. 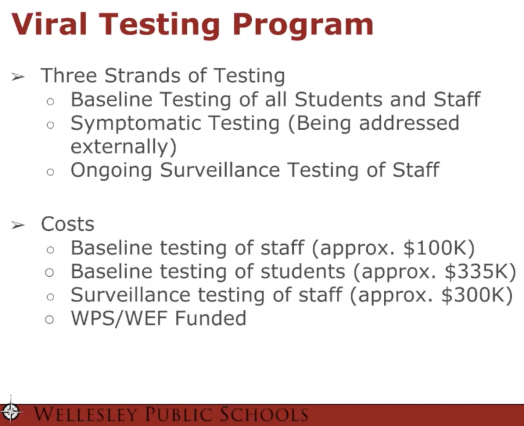 Katey Goehringer, who has been spearheading the RFP process, said the hope is to begin testing next week, before in-person school begins. The RFP has focused on non-painful PCR testing—shallow nasal (anterior nares) or saliva varieties, with the anterior nares option targeted for students.

Information materials are being prepared for the community, and a webinar will be offered next week, too, Goehringer says.