The “new” Wellesley High School building isn’t so new anymore: Feb. 28, 2022 marks the 10th anniversary of the building now used to educate the town’s teenagers and launch them into their next adventures.

Not everyone in town was happy about spending $115M on the high school, which in 2012 replaced the 1938 building. That school was given a classy send-off in 2011 at the “Turn Out The Lights” celebration and is honored through the 1938 Room in the school library and via other artifacts integrated in the current building. 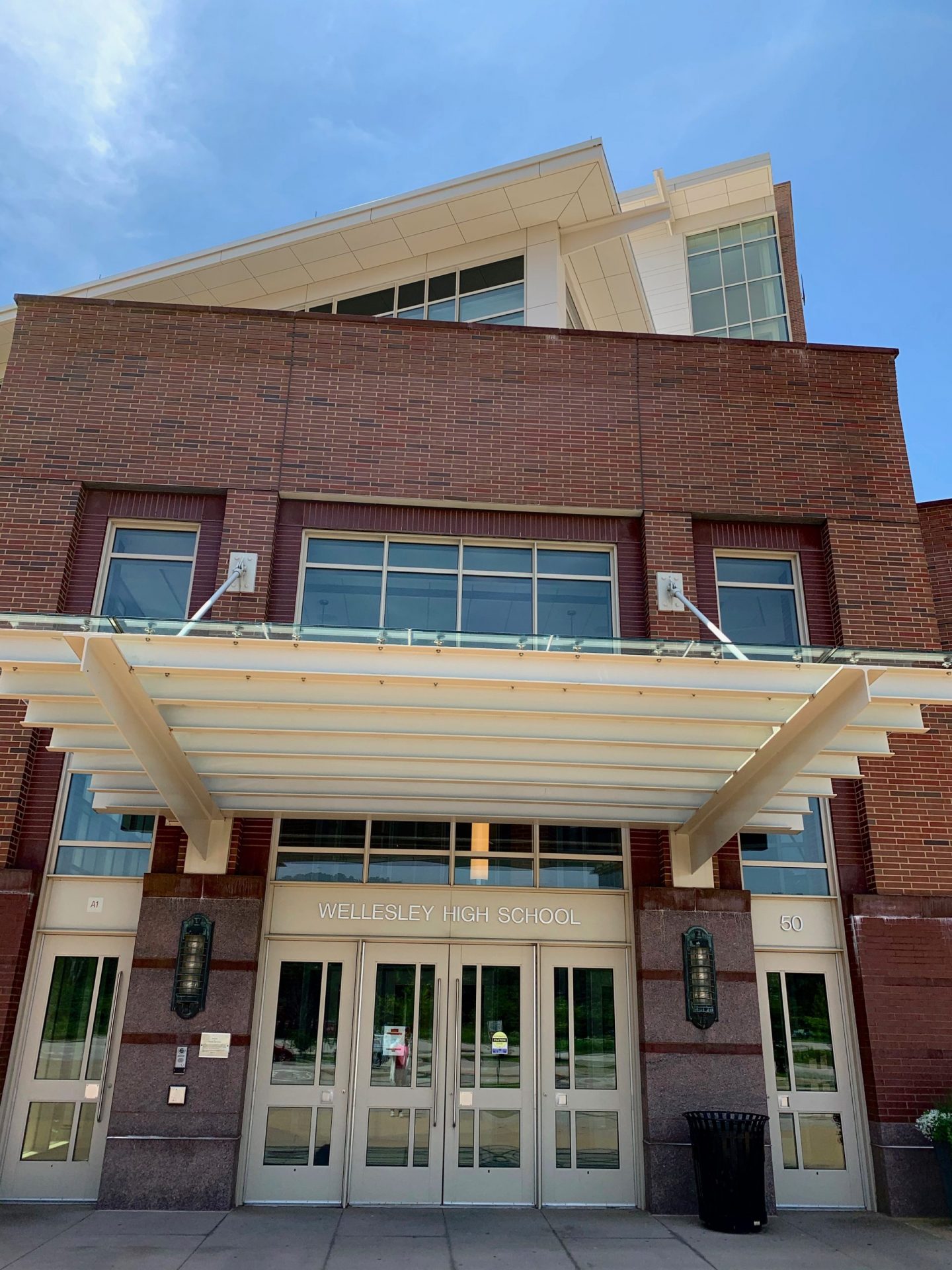 The current 280,000 sq. ft. school was built on the old school’s parking lot. Students on Feb. 28, 2012 entered the new building via a path lined by faculty and alumni. Opening day ceremonies included a Chinese lion dance, and various open houses and dedications followed in the months after that.

There was an announcement made at the high school Monday morning to commemorate the opening of the new building, not that most students would remember its birth. Principal Dr. Jamie Chisum says he’ll probably mention it in his next email to families, too.

“The building is holding up well from a teaching and learning perspective,” Chisum says. “I know there are lights and filters and some system things for heating and cooling that have needed to be brought up to date, but the facilities department really does a tremendous job keeping on top of that. We still feel really fortunate that the town not only invested so much in the kids to build this facility, but that they continue to support the building by keeping the systems up to date.”

Chisum’s favorite thing about the building “is probably all the natural light in the main lobby, in the cafeteria, in the library, in the stairwells and at the ends of every single hallway.” Not lost on him are the environmental features—”the angle of the ceilings that capture more natural light depend upon the side of the building, the stacking of the Science classrooms to make more efficient use of gas and water, and the geothermal heating/cooling system used for our year round spaces on the first floor. There was a lot of really smart thinking that went into this place.”

The principal says he couldn’t imagine being in the old building during the pandemic. “We would have struggled with air quality and circulation in big ways. There would have been a lot of open windows,” he said.

He’s also a fan of the 1938 room in the library because it contains so much school and town history.

“It also has the wooden bookshelves and slate window sills that came from the old English rooms where I used to teach—they were actually the original library from 1938,” he says.

Former Wellesley School Committee Member Suzy Littlefield said she’s been thinking a lot about the school hitting the 10-year mark, and credits Gig Babson as the driving force behind the new school.

“Without her as Chair of the School Building Committee, I am sure we would not have ended up with a new school,” she said. “Purchasing the three houses on Seaver Street to increase the size of the school site, working with a wide variety of interest groups, reaching out to those who wanted to preserve the 1938 school, navigating a new [Massachusetts School Building Authority (MSBA)] program with the Commonwealth, plus getting approval of the most expensive Town building in the history of the Town during a challenging economic climate, were challenges that Gig Babson provided key leadership to overcome.”

Babson’s efforts were commemorated in the naming of the Katherine L. Babson, Jr. Auditorium.

Littlefield says the building of the new school was the easy part. “The much harder part was the long process of study, design and approval to get to a shovel in the ground,” she said.

If Littlefield has one regret about the current building, it’s the absence of an elevated track in the gym. “We had to reduce the square footage of the project during our negotiations with the MSBA, very tough choices were made,” she said.

Like Littlefield, Wellesley High sophomore Fiona Zhou could see the benefits of having a track inside the school. She has friends who run indoor track and sometimes head into Boston for practice. But her initial reaction to the question of “What did you wish the school had that it doesn’t” was “I wish the school had a pool. I believe that Newton North has a pool at their high school. Of course, Newton is a city and received much more funding for their school to do it, so it’s a bit of a pity that Wellesley didn’t get the same amount to create a swimming pool for itself.”
Overall, Zhou likes the school building.

“The classrooms are arranged in an orderly fashion and placed good distances apart. Each floor is identical, which makes it easier to navigate,” she says. “The courtyard serves as a great place to have lunch and socialize with other students. Coming from the middle school, we always cracked open windows or used fans on hot days, but being able to have AC in the high school has been a huge plus.”

Zhou’s first year at the school took place during the pandemic, and she says the WHS administration and staff has done a decent job at getting students to wear masks and keep socially distanced. “But of course that’s hard given the large student body and the size of the hallways and classrooms,” she says.

If Wellesley Facilities Director Joe McDonough had it all to do over again, he would have liked to have had LED lights installed from the start. He’s now in the process of pitching town boards and soon, Town Meeting, to get the funds needed to support the LED switch.

“The building ‘envelope’ (roof, walls, windows, etc.) is very efficient, so I really wouldn’t change much there— although the insulation in newer buildings seems to get even thicker to meet new Codes,” he said.  “Given a ‘do-over’ and knowing what our challenges are from a sustainability perspective, I think we would definitely evaluate an all-electric building with no fossil fuels. Interestingly, the administration wing of the current school actually has geothermal wells that provide heating and cooling to that space. With improved technology and the chance at a do-over, we would probably look to increase the amount of geothermal wells, and also consider using a variable refrigerant flow (VRF) mechanical system to heat and cool the school, similar to the systems being proposed in the two new elementary schools.”

The school and its national award-winning facilities team proved well positioned to handle the pandemic, McDonough said. “In the early part of the pandemic the CDC focus seemed to be on cleaning and disinfecting surfaces. We were well prepared from a custodial perspective to handle this challenge. In particular our Custodial Manager had the foresight to purchase a number of electrostatic sprayers prior to the outbreak, which put us in a great position to disinfect spaces. As the pandemic wore on, the focus turned to air quality, and in particular increased ventilation and filtration. Having a fairly new school with well-maintained systems allowed us to upgrade the filters to the CDC- and DESE-recommended MERV 13 filters through the school.”

Overall, McDonough says the building has served the town well and is holding up nicely, “largely due to the Town’s commitment to preventive maintenance and the hard work of our dedicated custodial staff. Our staff often hears comments about how good the building looks despite being a decade old.” McDonough says he can’t help that upon the school’s 10th anniversary of long-time facility manager Tom Zinck, who passed away last year. “Tom was there when the school opened in 2012 and was always a presence in the school community, proudly representing the FMD,” he said.

Like many, McDonough’s favorite space in the building is the main lobby. “The large Town seal embedded in the terrazzo flooring, the salvaged weather vane, and the way the space opens up to greet students is pretty awesome. The terrazzo is incredibly durable too, so it require less maintenance,” he says.