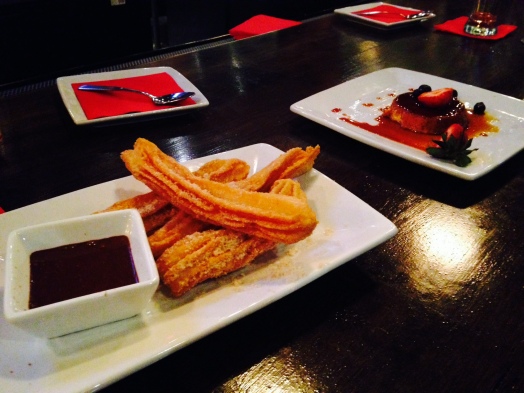 Wellesley has been adding restaurants to its roster at a clip of about one every six months and, with the enthusiastic response to Bocado, a Spanish tapas offering,  the town shows no sign of having reached a point of fine-dining overload. Wellesley has boasted Blue Ginger and Alta Strada for years now, and with the addition of The Local in November 2013, Juniper in July, and now Bocado, there are fewer and fewer reasons to leave town to find good food, or even just a seat at a good restaurant.

We stopped in at the establishment, located at 45 Church St., to see how tapas, sangria, and paella translates to Wellesley.  Our small group was sort of loosey-goosey about it all and showed up without reservations.  (I’d recommend being less on-the-fly than that and calling ahead if you don’t want to be turned away at the door, as so many were that night). There happened to be four seats at the bar, so we bee-lined over to them and ended up appreciating the way we could see all the comings and goings from our perch.  If this were a socialite blog I would start naming names, so many Swellesley luminaries did we see that night.  Suffice to say it was a who’s who and everyone seemed happy to be out on the town.

We wanted to get a good feel for the menu and went with The Bocado Experience.  With this order, you choose 13 savory dishes and one dessert.  At $160, it’s meant to be shared among four people. The bartender gave us a piece of paper and a pencil and, in our neatest handwriting, we wrote down our choices.  As is customary at a tapas restaurant, our food came out bit by bit as it was ready, rather than all at once.  At no time were we tapping our feet, looking for the next dish to come out, nor was the presentation rushed.  There was always plenty of tapas to go around. 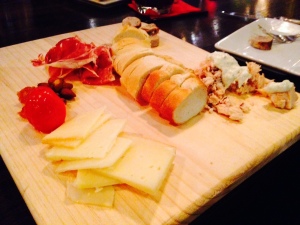 And it was quite tasty at that.  Our group particularly liked the roasted eggplant, which had a nice, smoky, autumn taste to it.  The bacon wrapped scallops with white truffle honey were fantastic.  Also popular among us was the raw tuna with lemon basil crema, although the sweet potato chips that were served alongside it were limp, not crispy as I expected.  The mozzarella stuffed crispy rice balls with basil aioli got a thumbs up as well. Just as we thought maybe we were filling up, a generous platter of beef tenderloin with potatoes and roquefort cream came out.  That one was nearly our undoing, and it’s true that we were unable to eat our way through all the potatoes, even though they were salty and crispy-browned.  Somehow the tenderloin disappeared.

The menu encourages diners to complete the experience by sharing a pitcher of sangria for $25, but our group wasn’t unanimous on the sangria, so we ordered our drinks individually.  The diner who ordered the sangria reported that it had the requisite red wine fruitiness she expected.  I ordered a beer on tap and was served a 10-ounce glassful.  Seemed skimpy, but beer is not where Bocado is putting their emphasis, as their extensive wine and sherry list makes clear. Our friendly bartender made sure everyone remained content and refilled our glasses with water or other, as needed.

Then dessert came out, a donut-like confection served with chocolate dipping sauce. In a supreme effort of mind over satiety cues, we plowed through it, and it was just light and airy enough to convince us that it hardly counted in the grand scheme of things.  Whatever we thought we meant by that.

More Wellesley restaurants boozing it up

Inside new Wellesley restaurant, The Local