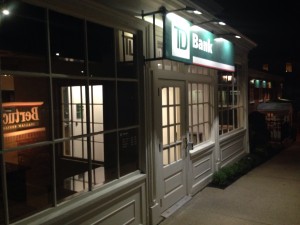 According to the Wellesley Police Department, a bank employee who called in the robbery described an initial suspect as a thin male party, approximately 6 feet tall, wearing a dark colored sweatshirt. Employees relayed that the male party may have fled the bank on foot. A note was shown to the teller, but no weapons were used. An undisclosed amount of money was taken.

Responding officers located two male parties on foot in the area that fit the description of the suspect, and they were detained as part of the investigation and later taken into custody. A third individual was located in a motor vehicle nearby and was also taken into custody.

The three individuals taken into custody are a 23-year-old male, an 18-year-old male and a juvenile. Identities of the suspects are not being shared initially.

TD Banks in Wellesley have been targeted by robbers in the past on holidays. There was the heartless bandit on Valentine’s Day of 2015 (380 Washington St. location) — surveillance photos were shared publicly, but a suspect was never identified. And back in 2012 the Marathon Monday robber on Patriots Day robbed the Rte. 9 TD Bank. Today is Global Running Day, so perhaps fitting that the suspects were scampering away from the scene of the alleged crime.

WBZ shows one of 3 suspects being taken into the Wellesley Police station after being caught on foot:

The Townsman has a shot of Police leaving the scene of the alleged crime.