While Massachusetts overall this summer has suffered its worst Gypsy Moth infestation since 1981, when 3 million acres were defoliated, Wellesley has gotten off relatively unscathed. I’m sure some of you would beg to differ, as the white (female) and light brown (male) moths certainly have clustered in parts of town and in great numbers in surrounding communities.

“We have been very lucky to be in a relatively Gypsy Moth free zone here in Wellesley this year.  But, of course, that doesn’t mean the same for next year,” says Cricket Vlass, landscape planner for the town’s Department of Public Works. The Natural Resources Commission would get on the case if it looks like Gypsy Moths will become a serious health threat to town-owned trees, she says.

The moths have grown in abundance this year after a couple of drier than usual springs during which fungus that usually keeps Gypsy Moth caterpillars under control has been unable to thrive. 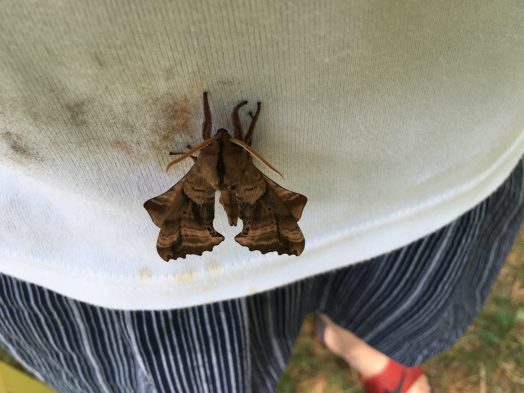 She was none too happy about that, but Mr. Swellesley was psyched to add this specimen to Bob’s Bugs page.