The cold, rainy and even sleety weather failed to deter many a Boston Marathon runner, volunteer and fan in Wellesley, but the elements also did reduce the crowd of watchers and dashed the hopes of dozens of participants as they headed into town.

A little rain ☔️ could not dampen the enthusiasm of the @Wellesley #ScreamTunnel! #BostonMarathon pic.twitter.com/rYveLwETcl

The Boston Athletic Association called the race the coldest in 30 years, with temps in the 30s at the start. Wellesley Fire Chief Rick DeLorie said the weather took its tool on runners, more than 130 of whom were treated for injuries and other issues in town. That’s at least twice as many people needing treatment as usual, he says.

“There were over 30 people transported to area hospitals for a number of medical issues,” he said. “It’s been a very busy day, great collaboration between fire/EMS, police and dispatchers to keep people  as safe as possible… the weather was really challenging.”

But Wellesley had its fair share of runners who put up good times despite Mother Nature’s obstacles. James Martin was the first Wellesleyite in the men’s division to finish, posting a time of 2:52:01. Yimei Huang, at 3:11.56, crossed the finish line first among Wellesley women. Full Wellesley results here.

Much credit to volunteers like Jim Jones and Lise Boutiette from the Greater Framingham Running Club, who toughed it out before the marathon and during it. 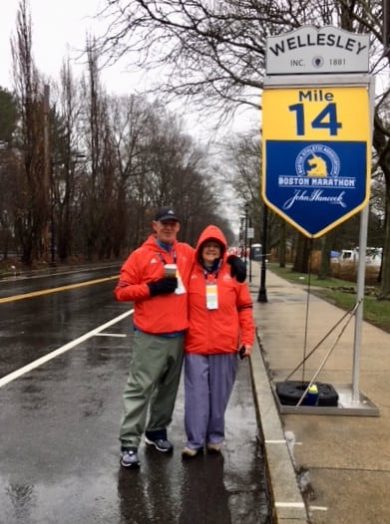