First of all, it’s not a costume. It’s regalia, and there’s a big difference. Arawak Nation descendant Claudia A. Fox Tree, entered the World of Wellesley Martin Luther King Day, Jr., Breakfast beating a drum. She wore Arawak regalia and spoke her Nation’s language as the crowd of 75 at MassBay Community College listened. When she finished, Fox Tree explained the difference between her actions and those of someone dressed up for Halloween.

“A costume is something someone puts on when they are trying to be someone or something else,” the keynote speaker said. Wearing regalia, a traditional style of indigenous peoples’ attire, has cultural and/or religious significance to the wearer. The point is that when an indigenous person wears regalia, that person is choosing to identify with his or her own culture.

From there the public school special education teacher delivered a talk designed to expand the audience’s ideas about Native Americans. Fox Tree laid on the line Christopher Columbus’ intentions when in 1492 he made first contact with Fox Tree’s tribe and other Native populations on the various Caribbean islands on which he landed. His confidence in his ability to conquer, and his intent to do so, came through in his journal. On his third night

in the Indies Columbus wrote, “I could conquer the whole of them with fifty men and govern them as I pleased.” That and worse pretty much covers how things went as Columbus made his four journeys from 1492 – 1502 from Spain across the Atlantic. Those events are widely considered to be the start of centuries of conquest of Native people and the colonization of their land.

Fox, M.Ed., spoke about what was taken from Native people over the centuries, from their land to their language to their very children, placed in boarding schools in the late 19th and early 20th centuries for assimilation purposes. Her talk asked the big questions of whose story gets told and by whom. She noted that Native Americans have always rejected the idea that Columbus should be celebrated. Increasingly, European ancestors of those who participated in and benefited from Natives’ subjugation are beginning to listen. There’s an increased acknowledgement of the discord inherent in granting a man honor when that man’s goals were to conquer those he could and kill those he couldn’t.

Columbus Day is a federal holiday. Local-level changes, while a reflection of the demands of the politically active in those particular areas, have no bearing on what the second Monday of October is designated country-wide.

If the 19th annual breakfast sounds like it was a little light on Dr. King, well, it was. The talk about the 1964 Nobel Peace Prize-winner generally focused on his overall vision of ending racism and discrimination. His presence was there in the room, but the overall feel wasn’t as King-centric as it has been at this event in the past.

The World of Wellesley has announced its annual Community Book Read.  All the Real Indians Died Off debunks that myth and twenty others about Native Americans. Author Roxanne Dunbar-Ortiz is also the author of An Indigenous People’s History of the United States. The book is co-authored by Dila Gilio-Whitaker.

April 25, 2019: Dila Gilio-Whitaker will be on hand for a community conversation at 7pm at the Wellesley Community Center.

Below: pics of the family event at Sprague School. Photo credit to Rama Ramaswamy. 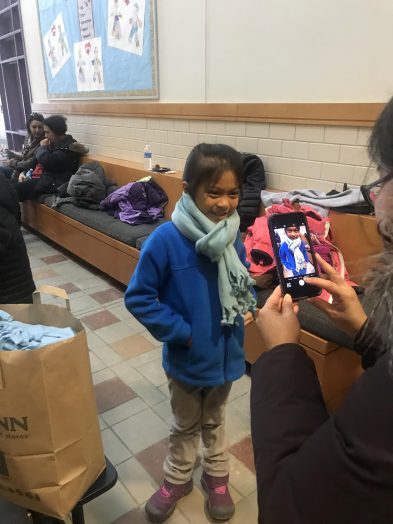