True story (not that I should have to stress that): I was sitting outside working on Swellesley Tuesday afternoon when the town’s announcement about its electric landscaping gear arrived in my email inbox. I started to read it, then as if on cue, loud motors from work being done in our neighborhood attacked my ears and brain from the left and right and I was forced to move my operation indoors to concentrate.

The word is that Wellesley’s Department of Public Works has dipped into its budget to acquire a riding mower and other battery-powered equipment to cut grass and do other landscaping on town land. The equipment is part of a pilot program designed to help the town reduce emissions and noise levels from the work its DPW does.

Going green all the way, the DPW’s Park and Tree division is exploring adding a solar panel to its equipment trailer to keep things charged up.

Mowing electric is all the rage. The Mass Horticultural Society is switching to an electric lawnmower to replace its old commercial gas mower, which Mass Hort says produces as much pollution per year as 141 cars in normal annual use. Mass Hort is raising funds to buy the equipment.

(Mowing electric is creating rage for others. I ran into a friend who moved to a home in Natick with a bigger yard than his previous one and the recharging and swapping out of batteries to get the whole lawn mowed with his electric equipment is bumming him out.)

But as for the Wellesley DPW, its move syncs up with the town’s Climate Action Plan designed to achieve net zero by 2050 by slashing greenhouse gas emissions. It also supports the DPW’s effort to convert some town parks into “Green Zones” on which all routine maintenance is performed with battery electric equipment and/or manual tools. 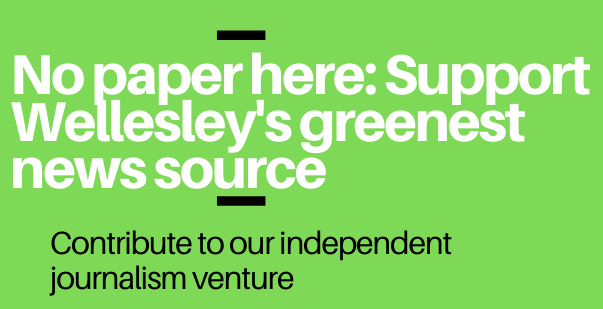