Town and public school officials this past week separately shared updates on work designed to help make Wellesley a more welcoming place for all people to live, learn, work, and visit.

Wellesley Assistant Executive Director Amy Frigulietti and a team from the Town of Wellesley Diversity Equity and Inclusion (DEI) Task Force briefed the Select Board on the first year of their work, which is initially focused on achieving racial equity (see Wellesley Media recording below, about 1-hour, 15-minutes in to the Dec. 6 meeting). The task force also made a bid for the Board’s support on a 2023 Town Meeting article to come that would seek approval of both an anti-racism/anti-bias resolution and a broad equity audit that could cost up to $100K. 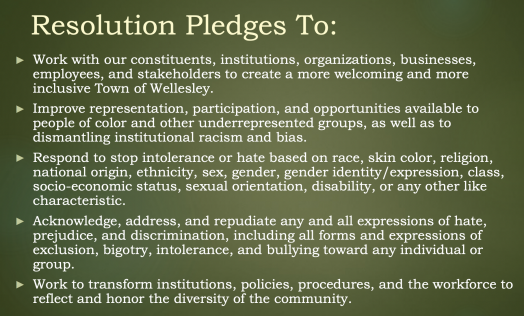 The 21-member Task Force, which meets every other week, also delivered a report on its first phase of work. Members divvied up into subcommittees focused on issues such as community outreach (including to businesses, schools, faith groups) and institutional structures (i.e., gaining more diverse representation at Town Meeting, among town employees, etc.).

Aware that a bunch of statements and frameworks alone aren’t going to get things done, the task force has actions and activities planned. Among these is a town-wide workshop in January or February to help raise awareness of DEI efforts, plus ongoing road shows at various groups.

The task force examined DEI efforts by other communities to see what has or hasn’t worked.

Melinda Arias-Voci said “no perfect model has been found so far,” though typically communities take a hybrid approach involving town employees and volunteers.

Task force member Donna Stoddard introduced the concept of an equity audit to determine the town’s commitment level to equity. The task force mulled whether to focus such an effort on town government or a specific area such as racial equity, but decided on a broader audit that would include many aspects of equity, including race, gender, age, religion, and more. The group determined a broader audit would get greater community buy-in.

“We hope that the equity audit will help us understand where we are today… how equitable, inclusive, and diverse is the town?” Stoddard said. “We will then be able to set goals, prioritize our actions, and at a later date assess whether or not the town has made progress.”

In looking at other communities that have done or are doing audits, Brookline put $100K toward a racial equity audit and Newton is spending $135K on a broader one. Wellesley’s task force got an estimate of up to $75K for a community audit, and would also be interested in DEI training that could cost up to $3K per session.

Among questions from the Select Board, which will likely vote on the proposal come Dec. 20, were how metrics might be used to show progress. Stoddard said the audit would include a questionnaire that would generate data and supplement information gleaned from focus groups. The audit would also point out training gaps that could then be addressed, Select Board Chair and task force member Lise Olney said.

Update (12/21/22): The Select Board did vote to support the audit and resolution during its Dec. 20 meeting.

Select Board member Tom Ulfelder said near the end of the DEI segment at the meeting, “what we’re being challenged to do is to discover what we’re willing to do to address the intent of what we say. We have that list of things that we have done, many of them are concrete action items that are important. But many of them are at risk of being simply aspirational, and what I think the equity audit does is help us focus on transitioning from these items being aspirational to being accomplishments that we have made as a community together.”

The Select Board and School Committee unfortunately now usually meet at the same time, as they did on Dec. 6. If you missed either and want to catch up, you can view the Wellesley Media recordings, including the School Committee meeting one embedded below, where the DEI discussion begins about 33 minutes in.

Dr. Jorge Allen, interim director of DEI for Wellesley Public Schools, and Sandy Trach, assistant superintendent of teaching and learning, led a 90-minute update during the School Committee meeting, with a focus on the the District Equity Strategic Plan and efforts to close opportunity gaps for students by ensuring that teachers understand culture’s role in education and have high expectations for all students to learn. The school system offers a host of training and education opportunities—including required courses—for staff, and additional programs for students and the community.

We appreciated Allen defining the concept of educational equity: “We’re really talking about eliminating the predictability of outcomes based on identities.” Overall, the school system has a way to go in reducing its use of academic administrator-speak and jargon—i.e., “Adopt rigorous Multi-Tiered Systems of Support (MTSS) frameworks across all levels”—to make its DEI plans more accessible.

Some highlights from the update:

Student Tristan Gardner spoke to the issue of hiring more teachers of color. While 33% of the students at Wellesley Public Schools are people of color, only 10% of teachers are, Gardner said. Addressing this disparity by hiring a more diverse staff will “strengthen learning,” he said.

Gardner, who described himself as being of both Asian and European descent, said his advisory teacher is likewise, and that this benefits the student. Having an adult he can talk to regularly about issues like race “makes me feel understood and represented on a deeper level than can be done by a teacher of a different ethnic background.”

Monica Visco, director of human resources for Wellesley Public Schools, covered efforts by the school system to attract and retain a more diverse staff. Statistics were shown making clear that the K-12 workforce is dominated by white women. 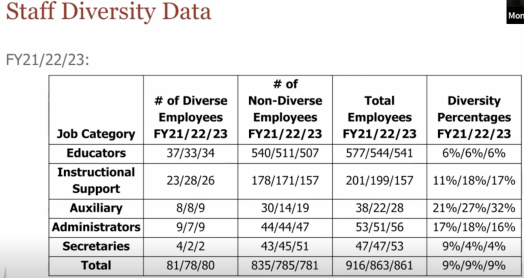 One approach to diversifying the faculty and staff is by “partnering with as many people as we can,” Visco said, and this includes taking part in the state’s Teacher Diversification Professional Learning Community and working with the National Employment Minority Network to assess Wellesley’s recruitment activities. Mentoring and bringing in a diverse set of student teachers are also parts of the mix.

A possible future position would focus on recruitment, cultivation, and retention of a diverse staff, Allen said.

Sensitive issues were raised during the meeting.

School Committee member Linda Chow asked how the the schools, through their equity efforts, are encouraging students to be empathic without making some kids feel like they’re to blame for systemic racism in society. Trach replied that the programs in aggregate—systems/routines/common language, explicit skill building, and anti-bias training— are designed to “honor student identities, teach students that there’s strength in our diversity…” and teach from a young age the importance of respecting each other’s differences.

School Committee Chair Leda Eizenberg asked about the tracking of racist incidents occurring in the schools and the sharing of information about them with the community (during citizen speak at the start of the meeting a parent detailed racial bullying incidents involving her son at Bates Elementary School and her and her husband’s dissatisfaction with the school system’s response). Allen said reports are tracked, but that there’s inevitably a gap between incidents and actual reporting. Supt. Dr. David Lussier also responded regarding the complexities of how communication is handled in such situations, depending on the individuals involved, the grade level, whether word of the incident has already been widely aired on social media, etc.