Michael Cohen returned from the U.K. recently, and realized that he had left a guide book that he had borrowed from the WFL at a shop at Borough Market in London. So on Nov. 16, Cohen made a request through the Facebook group What’s Up Wellesley, which has over 5,400 members, to find
someone who might be in London to be able to retrieve and return the book for him.

Forty-two comments and suggestions poured in over the next few days. One respondent volunteered their sister who lives in London to help (but the sister was not visiting again until Christmas, past the due date!), another suggested buying the Library a replacement copy online for $9 (the Library won’t accept outside replacement purchases), and another wondered why the London shop couldn’t mail the book back to Massachusetts (shop refused to mail it).

But the post from Paige Ford Fisher worked. She wrote, “Hi Michael. We are in London and I know the place. I’ll go get it and get it back to you. We are suppose to be coming back to Wellesley for Thanksgiving, but I’m sick. If we don’t make it my husband will be back next week for work. He can get it to you!”

What’s Up Wellesley founder Lianna Ramage considers the group’s ability to help people to be one of its successes. While she also admits that the administrators of the group have all had to deal with negative posts from time to time, she wrote, “We volunteer our time, and the whole point of the group is to foster a sense of community!”

This story has a happy ending. Finally, Fisher wrote, “It has been a fun project. Book was returned to Michael’s home last night while he was out. Not the most exciting picture moment, but what worked for schedules. I love Wellesley and the playful nature of our community! Excited to move home this summer! Until then…happy trails!”

Wellesley residents love the Recycling and Disposal Facility, their award-winning dump. They also enjoy a great main library with two additional handy branches. The Town’s Municipal Light Plant (MLP) gets electricity back on within hours when neighboring towns wait several days for power. And residents may soon enjoy another Town service that few others have, super-fast internet.

The MLP began a pilot internet service program last March and is getting ready to launch a full service to commercial customers.

The MLP formed an Internet Exploratory Committee in June 2015, and began its pilot program in March of this year, focusing initially on commercial customers only. When asked recently how the pilot program has been going, one participant, Keynectup’s Doug Chrystall, said simply: “Very happy with it.”

MLP Energy Services and Planning Manager Trevor Criswell, who is heading up the internet project, confirmed last week that the MLP is now “evaluating launching a full program over the next few months. Pricing and service levels are among the factors we will be evaluating as we move forward.”

The Unitarian Universalist Society on Washington Street has been a Verizon customer for years but joined the town’s pilot program in hopes of getting faster and more reliable service. “There would be a lot of outages [with Verizon], and just slow, slow, slow speed, especially around lunchtime when a whole lot of other people were probably online,” said Cyra Coady, administrator at UU Wellesley.

The office manager for the Cat’s Hospital said she was told by the existing ISP’s that they couldn’t pull the faster service lines to her location, and of the current service she said that “sometimes it was so slow that we could not even perform the speed test.”

For many businesses, reliable internet access can be essential. Keynectup, a technology company in Wellesley Square, jumped at the opportunity to join the pilot program when Co-Founder Chrystall heard about it at a Wellesley Chamber of Commerce meeting. “We are paying about $150 a month for about 75 (megabits per second) down and upload, we’re only seeing 20 … but we probably need 300 for the work we do,” he said, of the company’s existing service.

“Right now, the fastest internet service, with the exception of a specific business class arrangement with Comcast or Verizon, is 250 megabits, up and down,” said Criswell,  “so we’ll be really blowing them out of the water in terms of speed.”

Wellesley first connected up a fiber network ring to serve seven town buildings in 1996, according to Town Annual END_OF_DOCUMENT_TOKEN_TO_BE_REPLACED

Get our daily email by subscribing here. 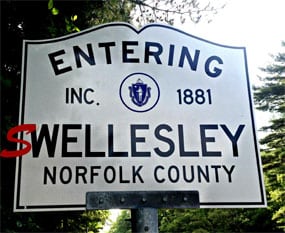