UPDATED: 12/16/14 with comments and information from the Wellesley Police Department

Muckrock, a news site that specializes in requesting and revealing government documents, has published a big list of surplus weapons, vehicles and less glamorous office equipment distributed by the Pentagon to local police and other government departments. The 20+ year-old government giveaway (recipients may need to pick up the tab for transport/shipping) — officially known as the 1033 Program — has come under scrutiny in light of the show of military might by authorities in Ferguson, Mo., recently, and thus, details on the program have now surfaced. The “recycling” program has doled out some $5B worth of surplus gear since 1990, according to Muckrock.

The Wellesley Police Department has been among the beneficiaries to the tune of $105K worth of stuff, from trucks to goggles to a rifle.

Perhaps you’ve seen the Humvee that the police secured for doing their job in the worst of weather conditions, as they did in assisting a woman who went into labor while her husband was driving her to Newton-Wellesley Hospital during a snowstorm last year. The police emphasize that this vehicle actually does not have any special armor, though did get a custom paint job to cover up the camouflage. The WPD also acquired a Humvee for the fire department, which is in the process of getting it certified by the state as a backup ambulance.

Here’s the list of Wellesley goodies from the DoD published by Muckrock:

Wellesley Police Chief Terrence Cunningham says that the department has actually received relatively few items since the inception of the program and that a number of those listed above are no longer in its possession and have been returned to the DoD. 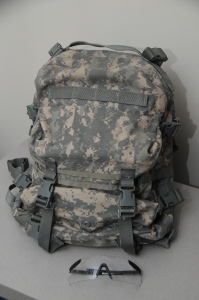 Cunningham writes to us that “Many of the items listed are described using government terminology making them sound much more menacing then they actually are. By way of example, the ‘Assault Pack’ is actually a common backpack that the officers use to carry their personal equipment. The ‘Goggles, Ballistic’ are simple eye protection that the officers wear during training exercises.” Both are shown here.

“There is little disagreement among law enforcement leaders that there may be some equipment that has been available and received by law enforcement agencies that may not be needed,” Cunningham says. “There may also be agencies that have received more equipment than they need based on the agency size or mission. Undoubtedly, there are agencies that have made poor choices in the use of the equipment or even misused some of it. Therefore, it is incumbent upon each Law Enforcement Agency (LEA) that participates in the program and those distributing the equipment to those LEAs to develop appropriate policies, procedures and training to ensure that the equipment is being properly deployed. This will help to ensure the viability of the program for the future use of LEAs and to limit the unnecessary destruction of useful government property.”