Then came COVID-19, after the Rotary Club had already placed their standing ordered, and the saplings had shipped.

After some fretting about what would become of the young trees, the Rotary Club, in partnership with the DPW placed the saplings in a bucket of water in five locations around town. The idea was for residents to feel free to take one for planting.

By 2pm on Friday, all 500 persimmon tree saplings had been placed in orange plastic containers and dropped off at the convenient spots. By 4pm each and every sapling had been scooped up, presumably by residents eager to put a weekend tree-planting project into action.

The original idea of this post was that I would direct you to the locations, and you would score a persimmon. The new idea of this post is to ask those of you who are planting a tree to send along a picture or two. Also, we wouldn’t say no to any pics of previously  planted by Wellesley’s 4th graders.

Suzy Littlefield managed to get one of the last persimmon tree saplings at Kelly Field (“Wow, they went fast.”). She says: “It is now safely planted with an anti-rabbit metal cage around it.  The sapling is pretty small but I have high hopes due to this tree,” a Spruce planted in 2001 when her son Billy was a 4th grader in Mrs. Gruenfeld’s class at Bates. 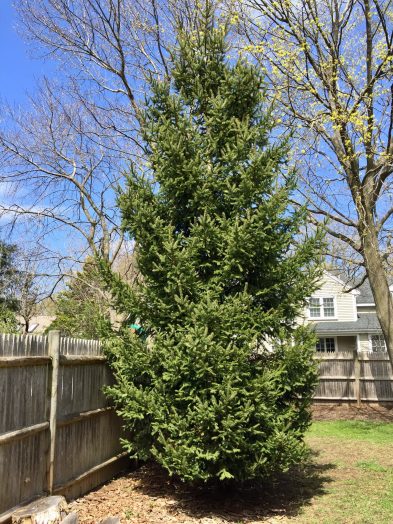