It’s no longer just an event far away on the horizon; Hunnewell Elementary School is actually coming down. The demolition of the elementary school began this week, as fences were set up around the property and bulldozers rolled in to get to work. A farewell walk-through was held in June.

The old building, opened in 1938, will be replaced with an 18-classroom, 76,500 sq. ft .building, which is expected to open in February 2024 (see project updates). During this period of construction students will be divvied up among other school buildings in town. This division will take factors such as distance and capacity at other schools into consideration.

The project made its way through the town government decision process in recent years, having been given approval by the Zoning Board of Appeals in 2021, and then having the construction funds approved during a Special Town meeting in October, 2021. The estimated total project costs now sit at $64.1M. Part of this budget includes planning and design expenses.

The town has provided concept images of the new project, which provide a better idea of what the school will look like. One noteworthy detail is that the new school is planned to have two floors, while previously Hunnewell was a single-story building. The new design uses a modern style, similar to that of Wellesley high school. We will be keeping an eye out for progress in the demolition and construction of the new Hunnewell Elementary School.

Hunnewell families gathered at the elementary school today to applaud the students of the school as they walked out it for one final time. 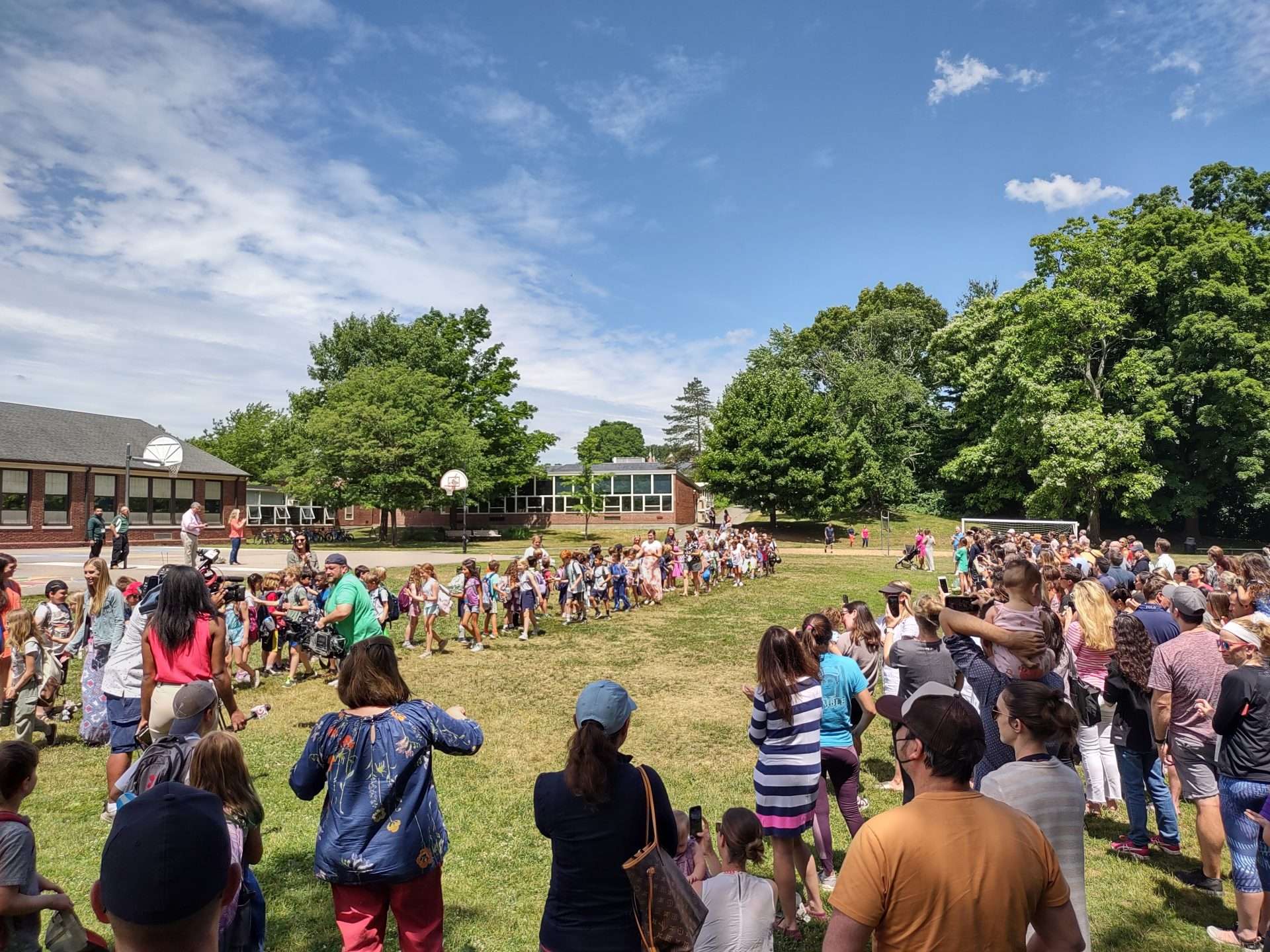 Hunnewell Elementary School is slated to be torn down and rebuilt beginning this summer, making this 5th grade class the last generation of students to graduate from the old building. Despite the building seeing out its last batch of students, spirits were high from both children and parents alike. Parents gathered in the center of the field behind the school, and the students walked out of the building, circling the applauding audience.

The building is not the only thing leaving, however. Judie Johnson, who has been a crossing guard for the school for the past 58 years, is also retiring. Judie was showered with applause, given flowers, and serenaded with a chant of “Judie! Judie! Judie!” (More from WBZ TV-4) 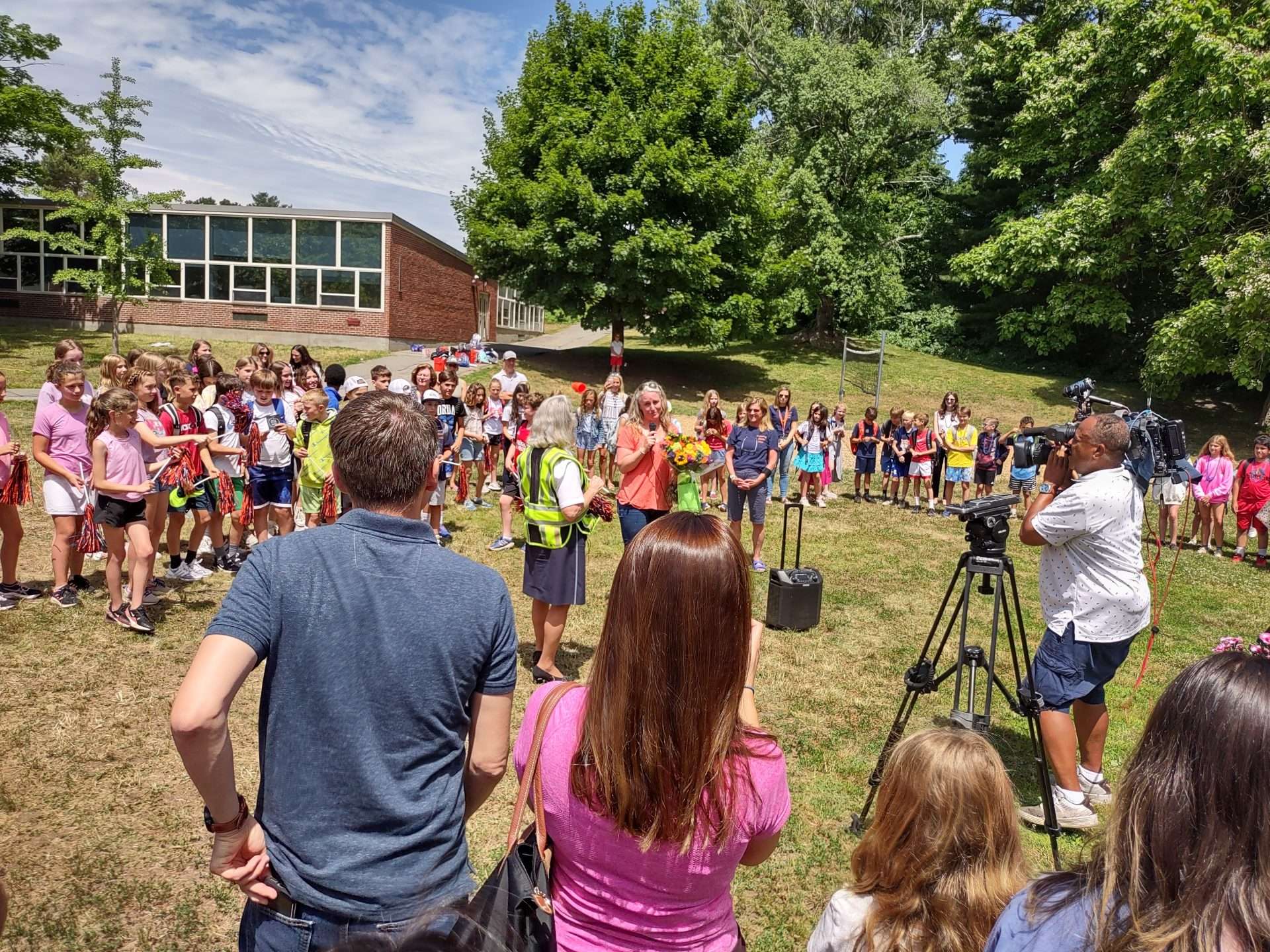 The new building is expected to be ready by early 2024, replacing the old building which has been around since 1938. Hopefully this one will last just as long.

There’s something special about the elementary school years, a time when kids learn to work and play well with others, not run with scissors, and absorb concepts of language, literacy, and numbers. The building where so much growth takes place looms large to its young students. But as we heard over and over during Wednesday’s Farewell to Hunnewell event, “It  looks so much smaller now.” If you’ve ever visited your former grade school, you understand. There are so many memories squeezed into those K-5 classrooms, it hardly seems possible that the walls can contain them all.

The open house gave current and former students, their families, and community members one last chance to visit classrooms before Hunnewell, built in 1938, is razed and replaced with a new 76,500 sq. ft. 18-classroom school slated to open in early 2024. Superintendent David Lussier told me at the event that fencing will go up around the school within days, marking the area as a construction zone. Staff and students will be divvied up among other schools under a swing space plan come fall. More on the school construction plans.

As I wandered the halls where I spent so little time volunteering back when my kids were at Hunnewell, a pack of excited friends darted past. “To the music room! Run!” When their school is going down, who’s going to tell the kids they can’t run in the halls if they feel like it? Not me.

Outside, I bumped into a trio of young men who I once could have named by spotting them across a crowded playground. No more. These were now college students, stopping by to remember the old days. Lifelong friends, said the mom of one of the guys. Hunnewell tends to have that effect on people.

I looked around for my tour companions, who had long since lost patience with my frequent stops to talk to old friends. A quick phone call gave me the predictable response. “We’re playing on the playground,” they said. Of course they were. Some things never change.

The Hunnewell Elementary School building is slated to be closed for good at the end of this school year to make way for a new structure in 2024. Families are in for exciting swing space action spread across four other schools until the new building opens in early 2024, if all goes according to schedule.

The Wellesley Public Schools (WPS) system hopes to minimize challenges for parents who might have to shuttle kids to multiple schools, and reduce overall drop-off and pick-up traffic, and score sustainability points by offering Hunnewell families free busing. To register, go to the WPS Fee Payment link. Click “Login”, and enter your username and password. Click on the photo of the yellow school bus located in the middle of the page to begin the registration process. To enroll Hunnewell student(s) only, choose the second Activity for FY23, “Hunnewell Bus Transportation enrollment.” More information on WPS transportation services.

Meanwhile, WPS has cut bus fees for all from $521 to a still-painful $500 under its FY ’23 budget just approved at Annual Town Meeting. Over the next 5 years, WPS looks to eliminate transportation fees entirely as one of its “moonshot” goals, Supt. Dr. David Lussier said recently at Town Meeting.

Based on how easily Wellesley Special Town Meeting Articles 2 and 3 passed in support of funding the proposed Hardy and Hunnewell Elementary School projects, it’s highly likely that the public will vote in favor of corresponding debt exclusions on Dec. 7.

(Read the election warrant and see a sample ballot embedded below)

The projects have their detractors, who spoke at Town Meeting about considering 1 project or the other for now and trying to avoid sky high pandemic period materials costs, among other issues. But if the public does vote for the debt exclusions and you’re a property owner who intends to stay here, you’re going to want to know how much those debt exclusions are going to add to your annual property tax bills.

We heard during Special Town Meeting that the peak median annual increase would be $753. But now the town has rolled out an online tax impact estimator to give you a better idea of your own situation (we’ll need to sell a few more ads to cover our increase). Though note that calculations are based on Fiscal Year 2021 assessed valuation of properties.

No dollar amounts are mentioned in the ballot questions themselves. Doing so would have involved the town taking some intricate steps involving state statues, as described here.

Register to vote by Nov. 17

The last day to register to vote in the Special Election is Wednesday, Nov. 17.

Residents may register online or at Wellesley Town Hall. The Town Clerk’s office will be open extended hours on Nov. 17, until 8pm.

You must be a Wellesley resident and a U.S. citizen on the date of your registration. Voters must be 18 years old by election day.